Guy Fieri, Who Raised $25M For The Restaurant Industry, Takes Shots At Jeff Bezos For Not Helping 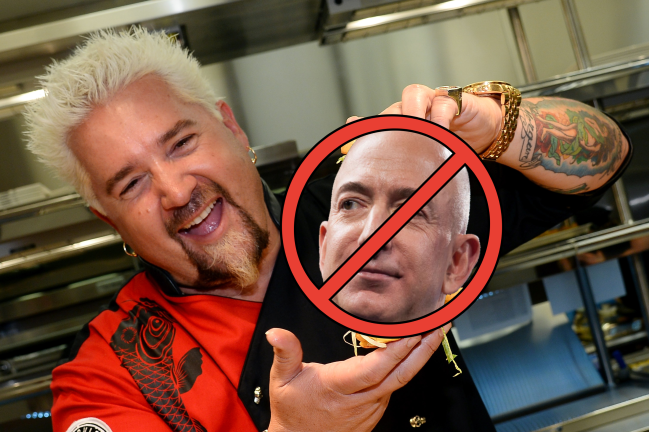 If there was ever a time to use the phrase “Go off, King” and not sound like an absolute weenie, it’s right now: Guy Fieri, who was recently profiled by The Hollywood Reporter to talk about his efforts to rescue the restaurant industry, took shots at the world’s richest man, Jeff Bezos, for not helping his cause.

Since the pandemic began last year, the longtime Diners, Drive-Ins, and Dives host has raised north of $25 million for restaurant workers who have been impacted by COVID-19.

“I need to keep doing this because it just needs to be done,” Fieri told THR‘s Mikey O’Connell.

Fieri, who describes himself as someone who doesn’t “get pissed” or “lose his shit”, admitted to doing exactly that in this instance.

Pondering how he could help the industry he loves when the pandemic began, Fieri had his business manager round up contact info for CEOs of major corporations, including Amazon’s Jeff Bezos. Fieri drafted personal letters to these CEOs, asking for donations for an emergency relief fund.

The fund — which has gone on to award more than 43,000 grants ($500 each) to out-of-work line cooks, servers, hosts, etc. — was buoyed by contributions from the likes of PepsiCo, Uber Eats, and Procter & Gamble, Fieri says. One person who did not contribute, though, was Bezos.

Fieri opines on the crisis with an undiminished passion. “I’m not into shaming people and telling who didn’t donate, that’s not my style,” Fieri says, as he credits getting huge sums of money from PepsiCo, Uber Eats and Procter & Gamble before taking a pause. “Jeff, by the way, didn’t help us,” he shares. [via The Hollywood Reporter]

Bezos, who has an estimated net worth of $203.9 billion (according to Forbes), reclaimed the title of the richest man in the world over Elon Musk back in February.