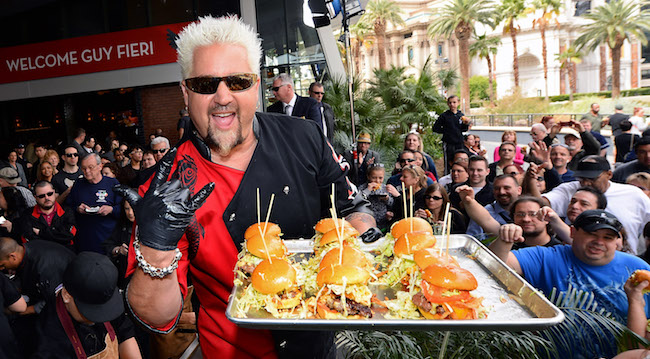 Last night, the New England Patriots were absolutely dominated by the Miami Dolphins during a Monday Night Football performance that made 40-year-old quarterback Tom Brady look like a 40-year-old quarterback for one of the first times this season. If you’re a Dolphins supporter (or a New England hater), you might not agree with the headline of this post, but as an admittedly biased Patriots fan, there was literally only one highlight the entire night— and it had nothing to do with what unfolded on the field.

As I stared into the distance during a commercial break wondering why the fuck the historically apathetic Jay Cutler decided to choose this game of all games to start giving a shit, I was shaken out of my trance when Guy Fieri magically appeared on screen opposite Jon Gruden for reasons I still don’t entirely understand.

The segment featured the Mayor of Flavortown assembling the Gruden Grinder, a sandwich I’d normally refer to as a cheesesteak if I knew I wouldn’t get chewed out by BroBible’s resident Pennsylvanian for doing so. I breathed a sigh of relief as the duo dug in knowing that my Monday night wasn’t entirely wasted.

"Hey dad, were you watching when Jon Gruden and Guy Fieri combined to make the greatest tv duo in history?"
"Yes son, I was." pic.twitter.com/wIwye0vXEv

As you might guess, I was elated to discover Fieri posted a behind-the-scenes video on Instagram showing him teaching Gruden “The Hunch,” a technique he learned from the cheesesteak-scarfing denizens of Philadelphia that’s designed to prevent you from getting covered in grease and Cheez Whiz.

As a diehard fan of Diners, Drive-Ins, and Dives, I know nothing will ever be able to top the time Fieri teamed up with Matthew McConaughey, but this came pretty damn close.