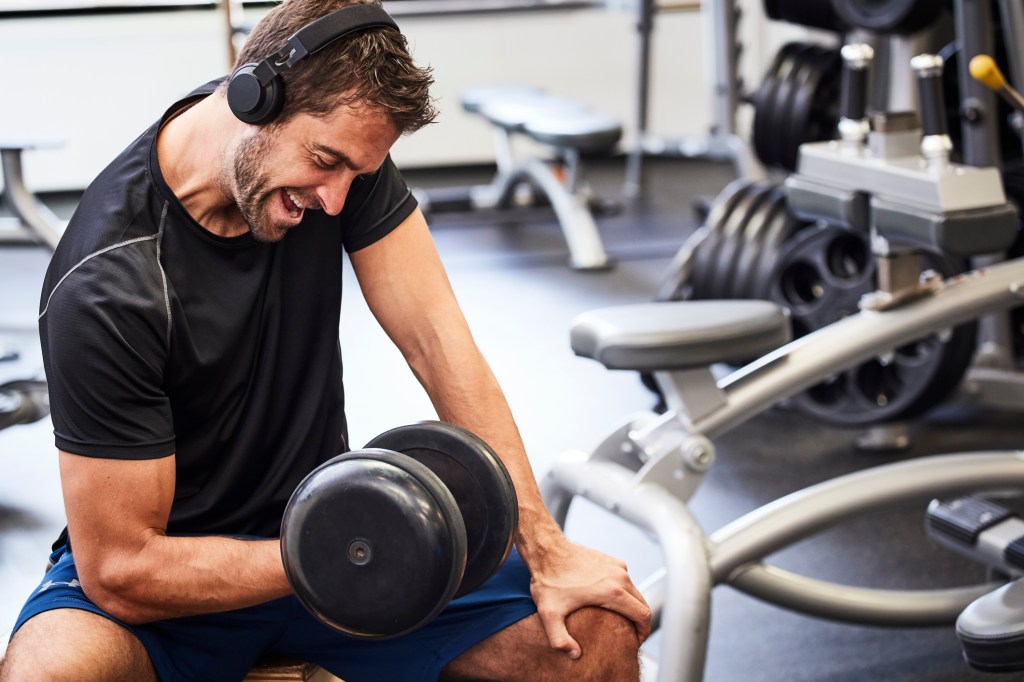 As far as I can tell, only two kinds of people go to the gym: those dedicated to getting into fighting shape, to face whatever big ol’ beast is breathing down their necks and the ones looking to draw attention to themselves. I’d like to think I fall into the category of the former.

I go to the gym every day, crank up some Cannibal Corpse, and put in a couple of hours of near-suicidal training to whip my body into something that doesn’t resemble someone’s beer-bellied uncle. It’s all about the work. I don’t snap selfies, post videos of my reps, and I don’t dance around on the machines like a complete and total imbecile. What in the world is wrong with those people?

I also workout to reset my mind – to unleash the lunatic brain that pays my bills. Loud, guttural tunes help me through the process. It’s like being juiced up on sonic steroids and the sweat of a Tibetan monk. Perhaps that’s why everyone goes to the gym with a set of earbuds in tow.

Music gives people the strength to power through heavy sets and intensive cardio sessions without losing focus. But yesterday, I mistakenly left my earbuds at home. That’s when I learned that some of you gym rat posers like to sing out loud.

I was headed over to the dip bar when, from out of nowhere, this horrific voice began screeching and squealing in the key of a dying animal. WUUUUUaahhh! WUUUaaaaaaahhhhh! The hellacious cries were god awful, unforgiving, and above all, a distraction I didn’t need. Nobody did.

Everyone in the gym was just sort of looking around to see if they could pinpoint the origin of the howls, presumably so they could punch the culprit in the throat to bring the shrieking to an end. “Someone is going to drag that diva out of here by the ears and flog them to death in the parking lot with a resistance band,” I thought. But nobody did jack squat.

Nope, no men in black suits and sunglasses leaped out from behind the ab machines and pummeled the guy into submission. None of the workers even acted like they gave two flying squirts that someone was on the floor making noises that I’ve only heard in a birthing room. I eventually glanced over at some dude on the bench press, hoping that he would flash some super-secret sign letting me know that we were on deck to take the loud-mouth out once headquarters sent word. It would be called Operation: Sick Cat. But he didn’t care either. Instead, the screeching continued, eventually infiltrating that part of my skull that feels hot when I get all stressed out.

I thought about how I was just seconds away from having a massive aneurysm when I finally spotted the tone-deaf doofus from across the way. This guy, probably in his younger-thirties, was just taking a leisurely stroll on a treadmill — hood up, earbuds in, and completely butchering the vocal stylings of one Miley freaking Cyrus. If looks could kill, Mr. Walk-A-Thon would have surely exploded right then and there into a pile of body parts. Only my doom-filled eyes were no match for his oblivion.

I stood there giving him the staredown in hopes that he would eventually look in my direction and realize that he was being a massive schlong. I even flashed him one of those hands up, WTF gestures that people do when someone cuts them off in traffic. But he didn’t notice. Nope, he was too busy coming in like a wrecking ball. At one point, I almost screamed, “shut the @#$! up,” at the top of my lungs, but that was only going to make me look like the crazy one. I fully understood that I needed to devise a better plan of attack or else not only was I risking an aneurysm, but possibly even the loss of my black card privileges.

I eventually walked over there and got the man’s attention. I felt the situation was something that could be sorted out with a man-to-man conversation. It also occurred to me that he might come down off the treadmill and start swinging. I didn’t need or want that kind of trouble. I was just trying to work out in peace. So I pointed to the biggest dude in the place and told him that the guy had mentioned being annoyed by his singing voice. “I know his brother Joey,” I said. “Both of them have been to prison.”

And that was that. Silence had finally arrived.

Listen, I’m not trying to be a Gym Nazi. I realize that some of you only get a few hours to yourself every week away from the kids, your significant others, or whatever horrors fill your miserable lives. I’m a person too. My life sometimes sucks the most, so I get it. But please leave the rest of us out of your cardio karaoke therapy sessions. None of us want to hear it.

If your girlfriend tells you she’s sleeping with someone else, and you feel the need to get in touch with your feelings at 2.3 mph, please do whatever is necessary to internalize the heartbreak and save the off-key shrills for your post-shower workout – when you’re all alone. Even if you’re just one of those happy-go-lucky individuals who wants to make the world a better place by filling it with music, resist that urge at all cost. I assure you, your voice is not inspiring any of us to go harder in our pursuit of greatness. The only thing it could possibly inspire is mob violence.

You have been warned.

Now, while I have your attention, you should also stop conducting these impromptu acapella movements in other places too. It’s not only unnerving to hear some fool going full-on Sinatra during his workout, but this also goes for the grocery store, the post office, the liquor store, or anywhere else inhabited by perfect strangers. We are living in a time when most people are just trying to get by with as little human interaction as possible, and your blatant disregard for the fabric of society only stands to invoke a state of foul-mouthed contempt. You are not special – I don’t care what your mom told you and how many participation trophies you hold — and most of you can’t carry a freaking tune in a bucket. There, I said it. By all means, keep honing your craft. Just not in the gym, especially not mine. If you really must perform a matinee at your local Planet Fitness, have your people call their people. Maybe you’ll get lucky and book an exclusive showcase on pizza night. Until then, shut up and lift!