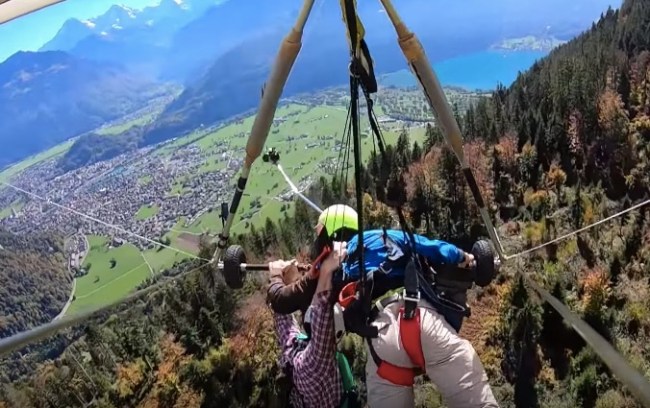 Hang gliding is something I’ve never done but an activity I’ve always been interested in doing one day. I’ve always figured that once I find time to vacation in the Swiss or French Alps one day I’ll give it a go, but only with the guidance and safety of a seasoned instructor.

I’d totally jump off a mountain in a hang glider by myself eventually, but I need someone to show me the ropes first. The same could be said about skydiving. I’d be all about solo jumps once I learned basic safety.

I know what you’re thinking…’Cass, why are you talking like such a pansy and droning on about safety?‘ Well, I just watched this muh-f*cking-terrying video below of a person going hang gliding in Switzerland where both they and the other person forgot to clip them into the actual hang glider.

The literal second they jumped off it was obvious something was wrong and then the person was left to hang on for dear life for the next two minutes until the hang glider made it safely back to the ground. They could’ve died at any moment if they lost their grip. This clip is relatively short, just over two minutes, and the entire time I’m watching this I’m thinking to myself ‘holy shit, how did they do that?’ Seriously, do you think you could hang onto a bar like that for 2+ minutes if your life was on the line? I’m thinking the percentage of people who could is like 50/50.

Shout out to /u/vanguard_anon for sharing this completely batshit crazy clip. Had that person lost their grip and fell I never would’ve watched this video, primarily because I’m not really into watching people die on the Internet. It’s just not my thing.

Thankfully, this person was able to summon some superhuman strength and hoof it out for two minutes dangling over some of the most terrifying mountains imaginable, just moments away from death the entire flight.

I’m not sure how many people will likely lose their jobs because of this footage but it has to be at least one, the instructor/owner of that hang glider. They should never be allowed to fly tandem again. That’s a mistake you shouldn’t even be allowed to make once, let alone twice.