Harvard Announces That All 2021 Classes Will Be Online; Tuition Remains Fair At $49,653 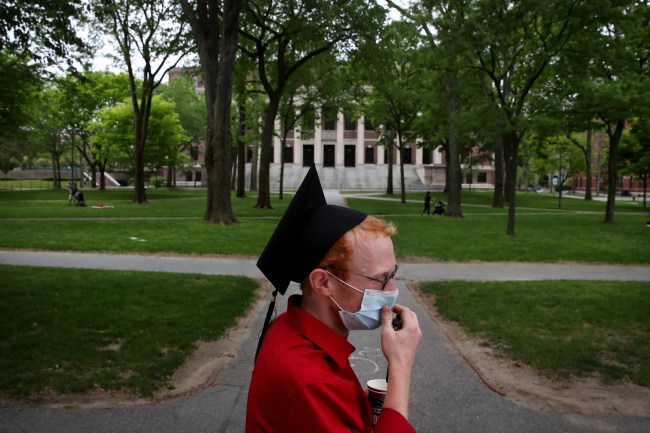 Well, it’s official: Harvard will be holding ALL of its classes online next year. And as Harvard goes, so go the rest of America’s universities. Harvard leads, always has. Whatever they do will become the rule. Watch. Sure, it might be hard for the Syracuses and UVMs of the world to set up online classes given that they’re still using dial-up modems for their internet infrastructure. And I have to believe that the Vassars and Swarthmores of the world will just cancel classes completely so as to avoid offending students whose religious beliefs conflict with virtual education. But, for the most part, I believe we’re about to see the landscape of American colleges follow the University of Phoenix model.

A few strange wrinkles from fair Harvard though:

ABC News– The Faculty of Arts and Sciences is bringing up to 40% of undergraduates to campus, including all first-year students, for the fall semester. Assuming that density remains at 40% in the spring semester, Harvard said it plans to bring seniors back to campus, and freshmen would return home for the spring.

The Freshmen will be on campus in the fall? Doing… what? Sitting in their shitty dorm rooms, watching lectures that are filmed a few hundred yards away? What… what is the point of that? I can’t imagine they’re allowed to hit Annenberg dining hall for food. How will the meals work? And they definitely won’t be allowed in to the Hasty Pudding on Wednesday nights for games of civil war that only end when Matt smacks his head off the corner of the table, leading to stitches that Andy had NO business administering. What a terrible, terrible scar that left. Totally ruined his wedding photos. Great wedding though.

In all seriousness, this is such a bummer. College is the best time ever. If you’re an 18-22-year-old in America right now, I feel for you. Either you were about to start college and were jumping out of your skin with excitement for this new stage of life, only to learn that you’re going to continue living at home with your parents for the foreseeable future with no real hope of advancing your life unless you pay FULL TUITION for Zoom classes which you’ll never watch anyway; OR you were currently enrolled, heading into sophomore-senior year with your friendships established and an understanding of how things work, maybe a plan to finally ask out the cute girl from your CompSci section with some self-coded eVite, and now you’re stuck in limbo—also back at home with your parents—wondering when, or if, you’ll get your degree.

We actually interviewed a current high school student on our podcast Oops recently. Fascinating to get the perspective from that generation. Give it a listen here.

NEW: Harvard will hold all courses online for undergraduate and graduate students for the 2020-2021 academic year. https://t.co/PJ5MHZcFBs pic.twitter.com/nFYhKaL6cy

JUST IN: Harvard announces all course instruction will be taught online for the 2020-21 academic year.

Undergraduate tuition of $49,653 remains the same.