Harvey Weinstein Accuser Testifies In Court That He Doesn’t Have Testicles, Appears To Have A Vagina 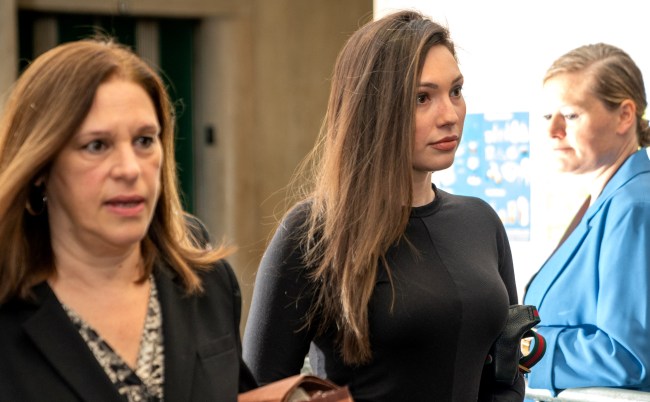 Disgraced Hollywood film producer Harvey Weinstein is back in court in Manhattan as he faces charges that he raped former actress Jessica Mann and sexually assaulted former actress Mimi Haleyi.

During her testimony on Friday, Mann dropped some serious bombshell allegations on those in attendance.

“The first time I saw him fully naked,” Vulture reports Mann told the courtroom. “I thought he was deformed and intersex. He has an extreme scarring that I didn’t know, maybe [he] was a burn victim…”

“He does not have testicles, and it appears that he has a vagina,” Mann claimed while recounting the fact that she had oral sex with Weinstein.

Vulture reports that when Mann claimed he had no testicles and a vagina, Weinstein dropped his head.

“He also peed on me once,” she added.

While those revelations were certainly the strangest things to come out of Friday morning’s testimony from Mann, it was far from the only shocking details Mann shared about her dealings with Weinstein.

Mann also shared numerous other observations and the alleged behaviors of Weinstein during their relationship.

• “There were a few moments where he made like a grunting sound, and he would look at me, but I didn’t know if it was a personality, or sort of an autistic-like trait.”

• “At that point, he had his shirt off and he had lotion. I started putting the lotion on his back … just like very awkwardly … with flat palm, stiff fingers, and smeared it around. He had a lot of alot of blackheads, and the texture of that was uncomfortable.”

She also recalled one occasion where Weinstein forced her to let him perform oral sex on her and another time when he allegedly raped her without a condom after “he stabbed himself with a needle” which she found in the trash then Googled what it was printed on it.

“I do not remember the medical term but when I Googled it, it basically implied dead penis type thing,” Mann recalled.

“He wanted me to have tea with him and his daughter right after,” she added. “I did not do that. He was mad.”

Read the rest of Mann’s quotes from her Friday morning testimony at Vulture.com.