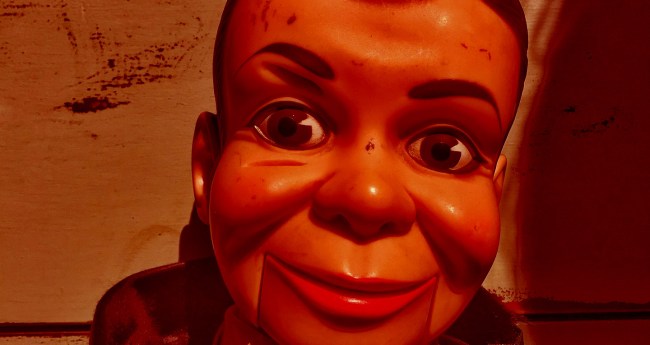 We do know why the dealer in California wanted to sell the ventriloquist doll, however. It was because he wanted it as far away from him as possible. (That’s not it above, but really, does it matter? All ventriloquist dolls are scary AF.)

Why did he want it as far away from him as possible? Because this particular ventriloquist doll, who Stewart has named Uncle Herb, acts like it’s haunted as its mouth opens and closes all by itself.

That alone is creepy enough, but he also says that the mechanism that controls the mouth is broken, so it shouldn’t be happening at all, reports the Mirror.

“I think that when Uncle Herb opens his mouth it means that he is not happy about something,” he said.

'I bought a haunted ventriloquist doll – the last owner wanted far away from it'https://t.co/QBJQ06NzCJ

“When we first got him, we were putting him in a case on his own for a while to give him time to settle and that is when his mouth first opened.

And by the time we went to get him back out of the case he had closed his mouth. So I think that when he closes his mouth, it means that he is happy and settled down again.

“We spoke to the spirit that was attached to the doll through a spirit box, a paranormal research device which allows spirits to communicate by manipulating white noise to form words and phrases, and asked what the name was.

“He told us it was Herbert and we shortened it to Uncle Herb because we know there is a connection to an uncle in his story.”

The creepy haunted ventriloquist doll has a name: Uncle Herb

“The spirit attached to uncle Herb was frustrated at being forgotten as he had never been given a name and had previously belonged to an elderly woman who kept him in a cupboard.

“Since we have had him, he had had lots of people engaging with him and he’s been given a name so there is a much more positive energy around him.”

The Daily Star reports that the haunted ventriloquist doll has referenced prison in conversations.

This is why he believes he doesn’t like being in the case.

The US seller got the doll from a family who wanted rid of it, after an elderly lady who owned it had died.

Related: Britain’s Most Haunted Doll Caught On Video Violently Moving And Rocking By Itself In A Chair

“Once the man got it back to his home, he said that he was constantly hearing footsteps through the night,” said Stewart.

“He eventually moved it to his garage but the noises and disturbances continued so he decided to put it up for sale.”

Stewart added that the man “refused to sell it to anyone in the same state as him because he wanted to be as far away from the doll as possible. The fact that he didn’t even want to be near the doll spiked my interest even more.”