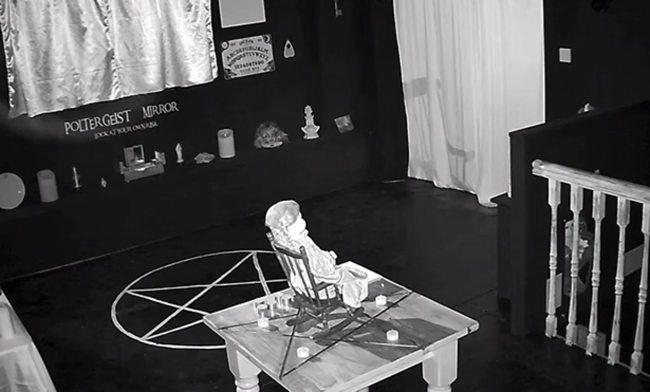 Via Ghost Hunters of Stoke on Trent

Think Annabelle, that creepy, evil doll from The Conjuring movies, is scary? (She is. You’re not wrong.) Apparently, Annabelle has got some competition across the pond in a haunted doll named Mary.

“Mary is definitely the most haunted doll in the United Kingdom, a lady in Stafford gave us this doll who was given to her by an elderly lady for her children,” Craig, the founder of G.H.O.S.T (Ghost Hunters of Stoke On Trent), who are currently in possession of the doll, told the Mirror.

“She didn’t feel comfortable with this doll, so gave it to us. It’s been in our possession for about a year now.”

Since coming into possession of Mary, Craig says the doll has shown numerous signs of unexplained paranormal activity.

“She’s rocked on a chair, she’s thrown herself out of the chair, she’s even moved her eyes from the right to the center,” he revealed.

“Mary is definitely one of the most haunted artifacts we’ve had, but we also had a couple who saw a Victorian baby walker move in front of them. We had two members of a band come to visit us last week and they said they saw the baby walker do the exact same thing.”

Craig’s team has captured video more than once of Mary’s unusual behavior, including a recent incident caught on CCTV late at night where Mary moved violently and began rocking in her chair with no one present in the room.

Related: Current Owners Of The House That Inspired ‘The Conjuring’ Say The Home Is Still Haunted

Mary was also caught on a security camera appearing to lean forward in her chair as guests of the museum stood nearby.

From the clown doll in the film Poltergeist and Chucky in the Child’s Play film series to real life dolls like Annabelle, Mary, Robert, Letta, Okiku, and Mandy (shown below), haunted dolls are simply never not scary.