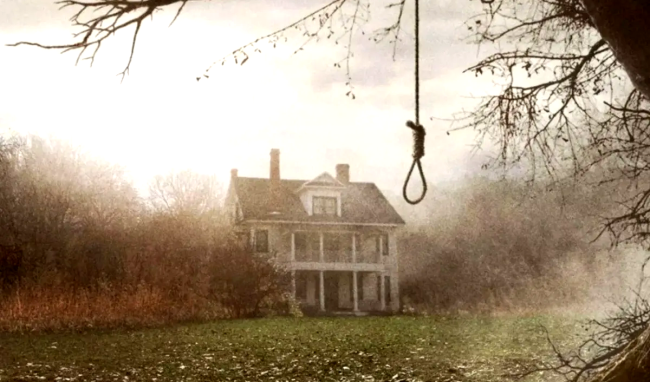 What started out as just one horror movie, The Conjuring, has now gone on to spawn an entire universe which includes eight (or is it seven?) feature films including the recently released The Conjuring: The Devil Made Me Do It.

Ever since The Conjuring premiered in theaters on July 19, 2013 there has just been something about that world that has captured millions of people’s attention.

A large part of the appeal of the film franchise are the creepy settings in which the movies take place.

From the cramped Enfield, England row house of The Conjuring 2 to Saint Cartha’s monastery in The Nun, all of the films’ locations have all been uniquely spooky.

Another one of those places, the house in Harrisville, Rhode Island owned by the Perron family in the original film, is not only one of the most frightening settings, it’s also still around.

On top of that, according to the home’s current owners Jennifer and Cory Heinzen, the house is also still haunted.

Related: Man Drops Dead From A Heart Attack During Screening Of ‘Conjuring 2,’ Then Goes Missing

It also happens to look nothing like the home in the The Conjuring, but the ultra-creepy story behind it is still the same.

The Heinzens, who just so happen to be paranormal investigators like the Warrens in The Conjuring films, purchased the three-bedroom, two-bathroom house in 2019 from Norma Sutcliff for $439,000, according to Realtor.com.

Sutcliff bought the home in 1987, and after suing Warner Brothers, the producers of the films, for drawing a plethora of unwanted visitors to her home and making life a “living hell,” she had decided enough was enough.

After purchasing the home, the Heinzens received the blessing of Andrea Perron, who used to live in the house with her sisters, mom and dad, and wrote a book series about it called House of Darkness House of Light, to preserve it and make it available to the public and researchers.

These days, the Heinzens are giving tours that were previously delayed by the pandemic, and, of course, posting a bunch of videos on TikTok.

One important note about the house: the Heinzens, while they may own the original Conjuring house, they do not live there. They’re not complete idiots.

“We had doors opening, footsteps and knocks,” says Cory Heinzen. “I’ve had a hard time staying there by myself. I don’t have the feeling of anything evil, (but) it’s very busy. You can tell there’s a lot of things going on in the house.”