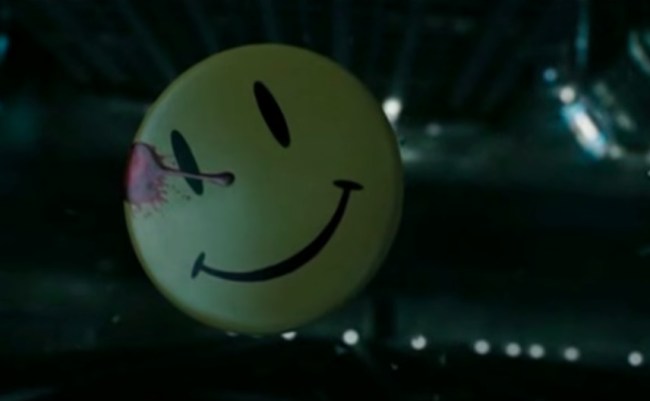 In 1986, graphic novelist and famed eccentric person Allen Moore set out to address the age-old question originally proposed by the Roman poet Juvenal (no relation to the “Slow Motion” rapper): “Who will guard the guards themselves?”

In Moore’s case, the guards in question were a group of costumed heroes known as the eponymous “Watchmen” who run into a bit of a problem when someone decides to start killing them off one-by-one.

In my opinion, it’s easily the best book ever written examining the complex moral implications of utilitarianism while also featuring a giant immortal blue guy who hates wearing pants.

Moore was also the man behind V For Vendetta, which was adapted into a movie in 2005.

Unfortunately, its legacy has been reduced to being the inspiration for the Guy Fawkes masks loved by people who are way too into the internet.

Unlike that work, many people thought it was impossible to make Watchmen into a movie.

That didn’t stop Zach Snyder from trying to do it with an almost shot-for-shot recreation of the graphic novel— although he made some notable changes to the plot.

Watchmen was met with mixed reviews, and while I personally enjoyed it for what it was, it left diehard fans wanting a bit more.

It took close to a decade but it looks like they’re finally getting what they’ve been craving.

Back in June, an HBO executive revealed a pilot for a show based on Watchmen had finished filming and today the network announced it was good enough to merit a full series.

They also released a short teaser suggesting the show will air at some point in 2019 (presumably after Game of Thrones comes to a close).

The Watchmen series is being helmed by Damon Lindelof, one of the driving forces behind Lost and The Leftovers, which was one of the more underappreciated HBO shows in recent memory.

The series will reportedly take place in the Watchmen universe but will feature a new plot and characters (including one played by Jeremy Irons of Lion King fame).

I’m sure HBO is hoping the new answer to “Who watches the Watchmen?” is “millions of people on a weekly basis.”