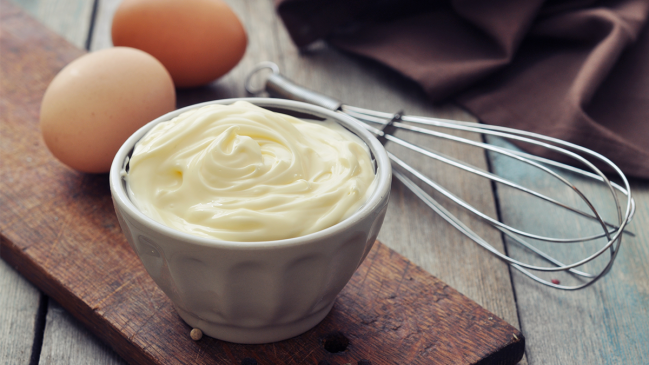 Eggnog is a staple of a ton of December gatherings, and there aren’t many ways to get into the holiday spirit better than helping yourself to a few mugs of the creamy libation that’s typically spiked with an assortment of spirits with the potential to make it a very formidable concoction.

A lot of people have a somewhat unique eggnog recipe they’ve honed over the years, but the general concept is pretty universal: you mix egg yolks, sugar, and cream with spices like nutmeg and cinnamon to create a mixture that can be consumed as is but is typically spiked with some combination of brandy, dark rum, and/or whiskey.

While there’s arguably no “right” or “wrong” way to make eggnog, I can’t say I’ve ever seen a recipe that calls for the somewhat gag-inducing addition of mayonnaise. However, as VinePair sadly reports, that hasn’t stopped the folks at Hellmann’s from trying to make that A Thing this holiday season.

The world’s most divisive condiment is the star of what has been dubbed “Mayo-Nog,” a frozen adult beverage that was apparently spawned from the twisted mind of bartending consultant Cody Goldstein. The $16 drink will grace the menu at Amy Fontaine’s in New York City, but the brand also released a recipe you can follow to whip it up at home if you’re unable to make the trek, which involves throwing the following ingredients into a blender until smooth:

When you consider mayo is just an emulsification of egg yolks and oil, using it as a base for eggnog is actually a fairly organic application.

As an unabashed Mayonnaise Hater, I can’t say I’ll be scrambling to try it myself, but it does seem like that glorified milkshake has the potential to be a bit more palatable than the ranch dressing monstrosity Hidden Valley used to try to ruin the holidays last year.