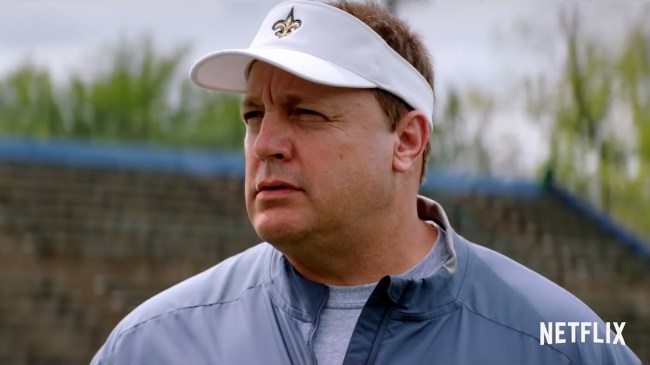 Do you know what ALL sports fans have been waiting for? Laying up night after night, praying to the almighty lord above to bless us with? A series about New Orleans Saints head coach during the year that he wasn’t actually the head coach of the New Orleans Saints, that’s what!

On Tuesday, Netflix unveiled the trailer for their new series Home Team, which stars — wait for it — KEVIN JAMES as Saints’ head coach Sean Payton, who spent the year he was suspended from the NFL due to BountyGate coaching his son’s sixth-grade football team. Glorious. Simply glorious. Plus, in addition to James, Home Team stars acting heavyweight and Twilight alum Taylor Lautner.

exec: we're making a movie about you
me: what's the bad news
exec: well…
me: …who's playing me
exec: …
me: WHO IS PLAYING ME https://t.co/f1KmMeGa2f

Worst. Movie. Since. Son of the Mask. https://t.co/CI3FjzzYnJ

Unless this movie is the origin story for what kinda shit Taysom has on Payton, nobody cares. https://t.co/HgeNMdu3r9

and also extremely under arrest https://t.co/6kNv5mUdLq

this is a looser based on a real story than paranormal activity https://t.co/D57mm31ZG5

With all due respect, WTF? https://t.co/hHtXPfBMkD

Whoever is last in your fantasy league has to watch it https://t.co/PTcAvOmyYs

there's a lot to unpack here, but also having a punchline in the first 15 seconds of a woman who works for the team not knowing who roger goodell is was quite the choice https://t.co/8ptD1Dp4QH

Of all the movies to make about the New Orleans Saints, the fact that this is the one Netflix chose to make is borderline offensive. Payton became the head coach of the New Orleans Saints THE YEAR AFTER the devastation of Hurricane Katrina (2006), and during their first game back in the Superdome in nearly two years, Steve Gleason — who was since diagnosed with Lou Gehrig’s disease — had a blocked punt that produced one of the most inspiring and electric moments in the history of the National Football League. Make *that* movie!

Here’s the official synopsis for Home Team, via Netflix:

Two years after a Super Bowl win when NFL head coach Sean Payton is suspended, he goes back to his hometown and finds himself reconnecting with his 12-year-old son by coaching his Pop Warner football team.

Home Team will hit Netflix in the United States on January 28th. Hopefully, the comet from Don’t Look Up makes contact before then.