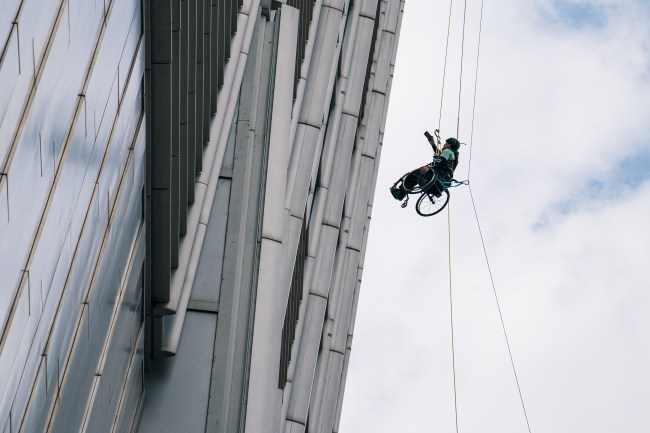 Rock climbing legend Lai Chi-wai, who became paralyzed nine years ago in a car accident, set out to climb the 1,050-foot Nina Tower in Hong Kong for charity this weekend. And due to insanely terrifying conditions, he came up just short:

Racked by cold and dizzy with vertigo, Lai Chi-wai struck his helmet again and again to stay alert.

On he went, pull after hand-searing pull, as he tried to scale a Hong Kong skyscraper by rope while seated in his wheelchair.

At 800 feet, though, the gusts grew stronger, relentless. The wheelchair began to spin. Mr. Lai, a former champion rock climber who had never been afraid of heights, began to fear for his life.

After swinging in the wind for nearly an hour, he called off the climb, just short of his goal. He was overwhelmed with disappointment. But in the process, he had inspired a city wearied by political turmoil and an unrelenting pandemic, and raised more than $700,000 for charity.

Nuts. Absolutely nuts. Dude is just hauling himself up a tower, hand over hand, while I grumble about taking the dog out for a piss because technically, he’s not my dog, I didn’t want him, even though I’ve grown to love him, but it doesn’t change the fact that SHE brought him into our home.

Look at what he says about his performance:

“I didn’t expect that I would be unable to finish, when there was still some strength left in my body. I have no excuses to give as an athlete.”

Well-wishers showered him with praise online. But what many saw as an unimaginable feat of endurance still carried, for him, the sting of an unfulfilled dream.

“I can only accept this version of events,” he said. “But as an athlete, I don’t know if this is the best ending. I don’t have closure yet. I’m still looking for answers.”

Can someone hire Lai Chi-wai to consult with Kyrie Irving for, say, ten minutes? Maybe just offer him a little perspective on what it means to be an athlete? Dear God, “I have no excuses to give as an athlete”—this guy is ready to live out his remaining years in a forest of solitude, feeling he can’t possibly face the shame of having ended his wheelchair skyscraper climb 200 feet short. Meanwhile, the only way Kyrie would even consider that building is if he were invited to a birthday inside.

“I’m still looking for answers.” Aren’t we all, Lai Chi-wai, aren’t we all.