How Late Does UPS Deliver? Here’s How Long You Should Wait Before Giving Up Hope 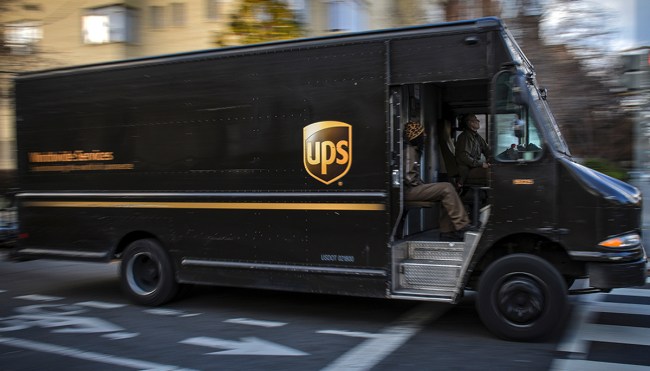 Those shipping and freight problems may have exacerbated delivery issues, but even before they reared their ugly head, you were likely all too familiar with enduring the torturous wait for a package regardless of the factors responsible for the delay. You can’t help but feel for your friendly neighborhood UPS driver who’s out there doing what just they can to make sure they can bring you what’s heading to your door in a timely manner, as it’s not like they already had enough on their plate (especially during the holiday season in a world where online shopping reigns supreme).

The deliverymen and women of the world might not be huge fans of the internet based on how it’s impacted their workload, but from a selfish perspective, it has made it a bit easier to get a sense of when you can expect a shipment to show up at your door. Was there something to be said for the element of surprise that’s lost now that we have tracking numbers and estimated delivery times? Maybe, and while they’re certainly a nice luxury, they’ve also spawned the new form of frustration you’re treated to when those projections don’t even come close to reflecting reality.

For example, I recently had a football jersey that was “in transit” at a UPS facility in lovely Newark, New Jersey for three days only to somehow end up in Oklahoma before finally making it back to my doorstep on the East Coast two days after it supposedly went “out for delivery.”

As a result, I spent a bit too much time researching the inner-workings of UPS to try to figure out the answers to a few eternal questions and figured I’d share my findings with the rest of the world in the hopes they come in handy for anyone who finds themself in a similar position.

How Late Does UPS Deliver? 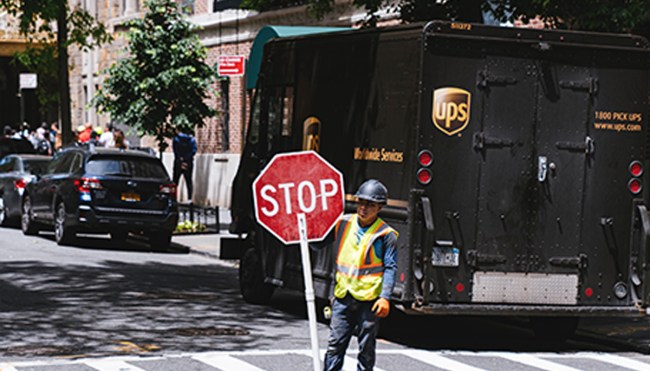 Most people work a 9-to-5 job from Monday to Friday, but the delivery drivers who work for the United Parcel Service are not most people. It might feel like life officially stops when the sun goes down (especially when Daylight Savings Time rolls around), but that’s decidedly not the case for them.

According to UPS, the company has an official delivery window of 7 a.m. to 9 p.m., which can often explain that rustling sound on your front porch at night once you’ve settled onto the couch and get ready to watch your stories (although it could also just be those damn raccoons again).

Based on the completely unscientific studies I’ve personally conducted over the years, the most common delivery window seems to be in the mid-afternoon range; anecdotally, your shipment will usually arrive at its destination around the same time you glance at the clock and think, “There’s no way there’s still this much time left in the workday.”

Of course, that varies depending on where you are on the route and how many things your driver is tasked with dropping off during their workday, but if you have a tracking number, you can normally get a good idea of when you can expect them to show up in that 14-hour span. I personally look at estimated delivery times the same way I look at speed limits: they’re really more of a suggestion than anything.

When it comes to the delivery business hours, the 7 A.M. start time is fairly concrete, but there are some instances where UPS will show up after 9 P.M. (especially during the holiday season. However, drivers will normally head back to base before then. This means if you haven’t received anything by the time people who still watch the nightly news sit down to be regaled with stories about zoning disputes and petty crimes, you should probably accept today just isn’t your day.

Can I Track the UPS Truck? 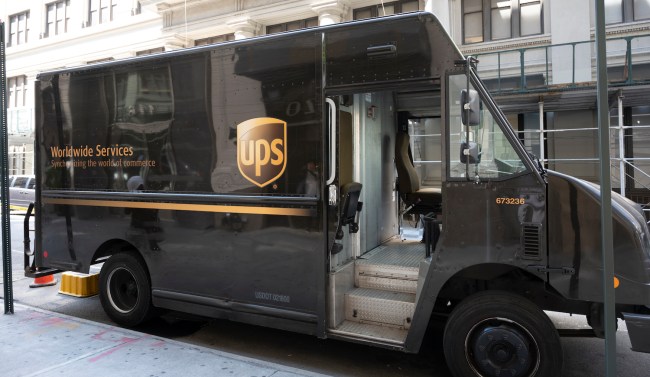 For some folks, having a tracking number and a rough idea of when a package should be delivered is enough. However, some people prefer having an extra degree of certainty, and considering the technology we have access to in this day and age, it doesn’t seem unreasonable to want to be able to track exactly where your package is at any given moment.

At one point in time, this would’ve required you to casually walk up to a UPS truck, glance around to make sure no one saw you, and then subtly place a tracking device underneath the vehicle. Of course, that would require you to know exactly which UPS vehicle was carrying your stuff in the first place and also be fine with potentially being charged with a felony.

Thankfully, there’s an easier way to track a UPS truck: enrolling as a UPS Choice member. Sure, that’s not admittedly as cool as orchestrating a complex and covert operation, but it’s also a bit easier and infinitely more legal.

UPS Choice members have access to Follow My Delivery, which is a live map that lets you get a detailed and real-time look at where your package is at any given moment (it’s worth noting there are certain cases where the Follow My Delivery feature is unavailable). The program is designed to give customers more flexibility, as you can also use it to arrange delivery to UPS Access Points and narrow down UPS delivery times to a certain window (although you may have to pay an extra fee).

The maps are customized and distributed once a driver has their schedule and allow you to follow them as they make their way to your location and even get a specific time estimate. However, I should warn you that based on the carefully calculated nature of the routes, you should be braced for the crushing disappointment that means the UPS truck may drive directly by your address without stopping before returning at a later time before its usual end of day arrives.

Does UPS deliver on weekends? 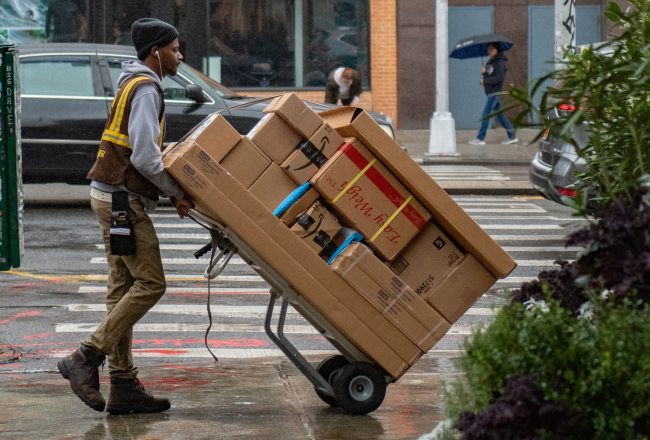 Yes. But also no. Much like the relationship between Alec Baldwin and Meryl Streep in the movie of the same name: it’s complicated when it comes to weekend deliveries.

For the most part, the biggest factor in whether or not UPS will deliver to you on weekends has a lot in common with the value of real estate: it’s all about location, location, location. UPS does say it delivers to residential addresses on Saturday, but that service is limited to locations “in more than 100 metro areas.”

Which specific metro areas are blessed with UPS Saturday delivery? I don’t know. The big ones? Let’s just say that if cell service is an issue for you at your house, there’s a good chance you are both not in a metro area and, more importantly, not in one of the more than 100 places UPS is talking about. So, yes, UPS technically delivers on Saturdays (and will likely do so earlier in the day).

When it comes to Sundays, though, you’re out of luck. Other carriers including the United States Postal Service and FedEx subscribe to the #NoDaysOff lifestyle: all days are business days for most residences, but Sunday is to UPS what Monday is to Garfield. There’s a chance that could change in the future due to the increasingly cutthroat nature of the delivery game, but that’s how things currently stand.

However, there is an interesting exception when it comes to Amazon packages: if UPS is handling shipping for something you purchased from the website, it can hand it over to the USPS for a Sunday delivery (also known as a “last-mile” delivery). Sadly, you can’t rely on that being the case every time, and like all delivery-related things, it’s best to just hope for the best.

Finally, if you’re curious about the UPS holiday schedule, you should know its delivery service doesn’t operate on New Year’s Day, the Fourth of July, Thanksgiving, or Christmas Day.

If UPS Does Not Deliver on Time, What Should You Do? 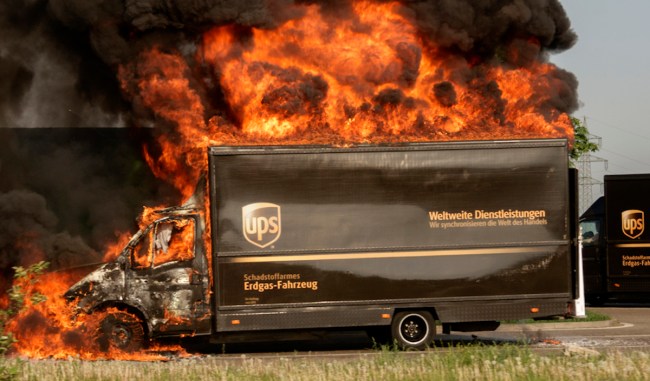 Before we dive into this question, I guess I should clarify the photo above the sentence is absolutely not illustrative of what you should do if UPS fails to deliver a package as promised. Please do not light a UPS truck on fire or attempt to exact any other sort of revenge on the company.

I cannot stress that enough.

Anyway, the first thing to do in this situation is to take a few deep breaths. Everything is going to be okay.

Once you’ve gotten yourself nice and composed, your best move is to keep your tracking number handy and try to get things sorted out by contacting someone UPS online or over the phone. I guess you could send a strongly worded letter in the mail, but that would probably defeat the purpose if you’re concerned about handling the situation in a timely manner.

In certain cases, you might be able to get refunded for some costs based on the type of delivery in question (UPS Next Day Air and UPS Worldwide Express are covered, but UPS Ground is not). That route is a much better option than revenge. You can also get a partial refund if it was delivered but came late, which might not be ideal, but it’s still better than nothing.