How Do You De-Escalate An Ultra-Competitive Couples Game Of Mixed Doubles? 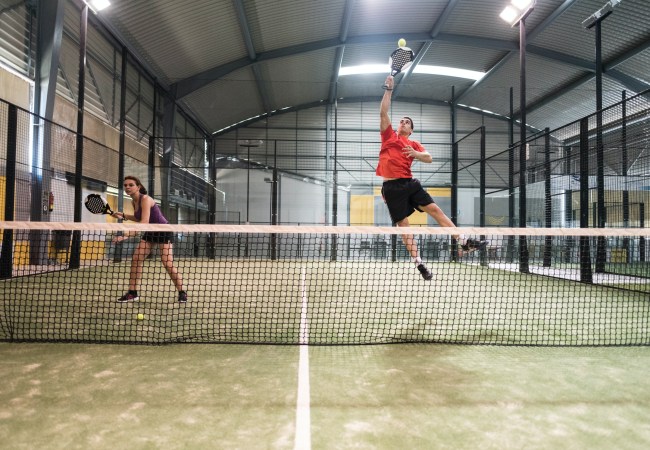 On Saturday, my friend celebrated his birthday party at his country club in New Jersey. We boarded a rented “party” bus—one of those plush little numbers with bench seating whose carpeted floors have soaked up gallons of spilled beer and stripper sweat—and raided the treasures of two large Yeti coolers as we traded the city streets for the rolling fairways of suburban New Jersey.

The plan was to play a fun paddle tennis tournament, enjoy a few chicken caesar wraps, and soak in the dwindling rays of a halfhearted November sun. If you’re not familiar with paddle tennis, don’t worry—you’ll never get the chance to play. Unless you win the lottery. But then again, if you’re the type of person who buys lottery tickets, you’re probably not paddle tennis material. More of a jetski enthusiast, I suspect. Nothing wrong with that! Jetskis are fun. Good for you.

Paddle tennis is a cross between tennis, squash, and Hell In A Cell. It’s a winter sport actually, though you can play year-round. Most courts have heated floors to keep the ice and snow away. Some families make it a tradition to play on Christmas day. This can lead to silent, fuming Christmas dinners, but a standing rib roast is far more enjoyable when a happy conversation is not distracting from the flavors of the meat.

If you’re looking to dive deep, here is the entirety of the 2018 Boston men’s final which, based on the number of spectators, was a very, very big deal:

I’ll bet the winning team was handed a beautiful crystal glass trophy which is now being used as a vase for unwanted flower arrangements. Like the fourth bouquet you receive when your mother-in-law passes, and you’ve run out of real vases.

Back to our day. Everyone in my group of friends is either married, engaged, or thinking seriously about it. Thus, it made sense for everyone to team up with their partner. Brackets were drawn and paddles were chosen. The problem is, many people had never played before. This led to a huge discrepancy in ability among the teams, which meant that those of us who possess paddle proficiency were trying to guide more than compete. At least, that’s how it should have played out.

Problem is, I have a friend who is too competitive. We all have that friend, but I promise my ultra-competitive friend is more competitive than your ultra-competitive friend. Don’t believe me? Let’s bet on it. Our guy makes life awkward. He makes fun uncomfortable. Case in point: everyone was happily rallying, being generous with serves (“play it!”) and just trying to roll along in the spirit of the day. Until they had to play this guy.

He was thundering around the court. Not quite diving for balls, but only because the court is made of a rough sandpapery surface that would tear the skin off your bones faster than ravens on roadkill. The entire court was shaking, the concertina wire walls rattling to a hum like a tuning fork of death metal. His poor wife was doing her best to stay out of his way, but in a few instances, she found herself in the path of her charging rhinoceros husband and she would shriek in terror. If they happened to lose those points, he would quietly mutter the updated score and offer a note of advice to his playing partner: “let me get everything.” Fun game plan, right?! Talk about team spirit.

We had the benefit of watching this unfold against another team, so we knew what was coming. I conferred with my girlfriend about our strategy:

“We have a choice. We can either have fun, and play in the spirit of the day. Or we can win, and it will be awkward because of how hard we’re trying.”

She didn’t hesitate: “I want to win.”

It honestly surprised me, the steely aggression in her voice. But I complied, put down my ruby grapefruit whiteclaw, and started to stretch.

From there, the game plan was simple: target the wife. That may sound harsh but it’s the basis of evolutionary theory: the strong prey upon the weak. Besides, he had already put this plan into motion the previous two matches, so we had no choice. He would charge the net and stand in the center, trying to smash overheads at the corners. But I was running the baseline like a shuttle drill and my lateral quickness hasn’t left me. A deft touch with my lobs sent him backpedaling towards the fence, scrambling in vain to hit returns. And once both sides had accepted the reality that he was going to try to bean us with the ball whenever possible, the gloves came off.

Overheads. Drop shots. Devilish spin on the ball. I was throwing junk, and his wife could barely hold the paddle. In the end, they were no match for us. I have a lifetime of racket sports experience, as well as plenty of paddle games under my belt, which meant that we could outlast them as long as we ignored social graces, moral etiquette, and maybe a few decades of gender advancement. Fortunately, my girlfriend is a solid player herself so we were able to win as a team, and we took them 6-3. High fives and hugs on our side, bristling resentment and avoided eye contact on theirs.

Here’s the question: How does one deescalate an explosive, uncomfortably competitive mixed doubles paddle tennis match? Do you stop keeping score, or impose a drinking penalty for points lost and turn it into a boozefest? That might have made things worse. I’m all ears, if anyone has any suggestions.