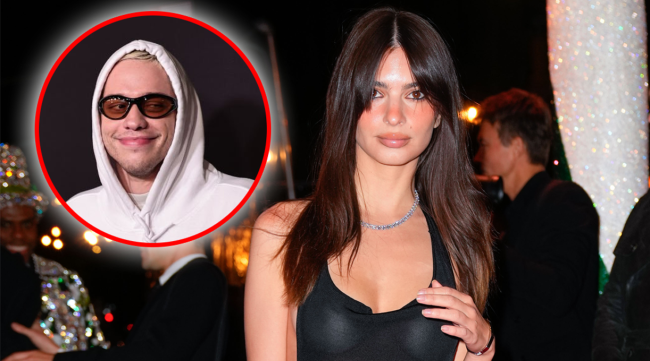 Howard Stern, who predicted back in September that the pair would eventually hook up, now tells Pete Davidson “to be careful” dating popular model Emily Ratajkowski.

“I don’t want to, uh, come off with a big head here, but everyone’s looking at me going, ‘you predicted this on the air,'” said Stern.

Howard then played a clip from a September show where he said, “I was thinking, Pete Davidson could go out with Emily Ratajkowski … That would be a good matchup there.”

“This dude is living the dream and, you know, you can get a little bit jealous and go, ‘geez, why him? blah, blah, blah,'” Stern continued. “He’s a funny dude, he’s famous, he’s rich, he’s got big d–k energy, everyone knows about his big c–k.”

Stern’s co-host Robin Quivers then brought up the fact that Pete Davidson said after breaking up with Kim Kardashian that he was done dating famous women, but he keeps going back to them.

“You ever talk to a drug addict and he keeps saying, ‘I’m gonna quit these drugs,’ but they can’t do it? Famous women are like a drug.”

At this point, Howard Stern issued a warning to Davidson.

After comparing Davidson’s relationships with women to that of Leonardo DiCaprio, Stern warns, “You don’t want to become the guy who just f—ks celebrity girls. So he’s got to be careful.”

That being said, Howard did add, “He’s on a terrific roll.”