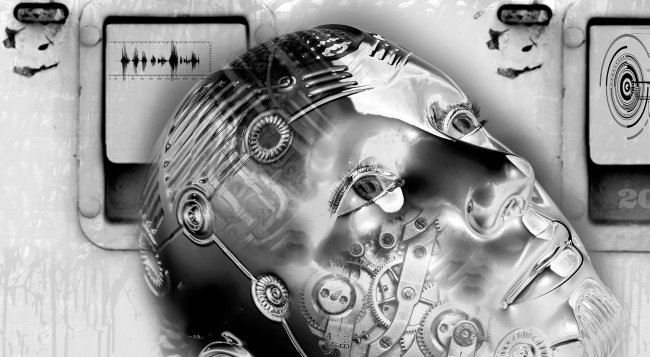 If you haven’t heard the story about real life human cyborg Dr. Peter Scott-Morgan yet, strap in because this story is wild.

First off, some background.

Dr. Peter Scott-Morgan was supposed to be dead by now.

The scientist has amyotrophic lateral sclerosis (ALS) and something called motor neuron disease (MND), which means that the only parts of his body that he can currently move are his eyes and a few small facial muscles.

Other parts/functions of his body, such as his lungs, sense of taste and smell, and voice box, are completely broken.

His brain, however, is still working just fine. And what a brain it is.

In 2017, doctors told Scott-Morgan he had just two years to live, but he defied them by beginning his transformation into a human cyborg in 2019.

THIS IS MY LAST POST as Peter 1.0. Tomorrow I trade my voice for potentially decades of life as we complete the final medical procedure for my transition to Full Cyborg, the month I was told statistically I would be dead. I’m not dying, I’m transforming! Oh, how I LOVE Science!!! pic.twitter.com/xCO17ph0lp

“And when I say ‘cyborg,’ I don’t just mean any old cyborg, you understand, but by far the most advanced human cybernetic organism ever created in 13.8 billion years,” said Dr. Scott-Morgan in 2019.

“Almost everything about me is going to be irreversibly changed – body and brain,” he said. “It goes without saying that all my physical interaction with the world will become robotic. And naturally, my existing five senses are going to be enhanced.”

“But far more importantly, part of my brain, and all of my external persona, will soon be electronic – totally synthetic,” Scott-Morgan continued. “From then on, I’ll be part hardware, part wetware, part digital, part analog.”

“I know this is going to sound ridiculous. Or delusional. Or a lie. But I don’t miss very much at all,” he recently told Frances Hardy of DailyMail.com. “Any more than I missed being a kid when I became a teenager. I’m looking forward.

“I have love. I have dreams. I have purpose. Oh, and I’m still alive. I mean really alive. Not just one of the living dead. Not just surviving. I’m THRIVING!”

EPIC AND AWESOME INTERVIEW with Frances Hardy top journalist at UK’s highest-circulation paper https://t.co/5CMX6B6kbc Brilliantly she conveys the overriding theme in my memoir PETER 2.0 that we should turn liabilities into assets. Whatever jokes life plays, have the last laugh! pic.twitter.com/D5tX7FhxZT

“Days may pass when I never once remember that in the past I could walk or move or (absurdly) even that I could talk,” said Scott-Morgan.

“My brain has its own ‘new normal.’ Instead of feeling like one of the living dead, I feel fully alive, excited. I’m really looking forward to the future. I’m having fun!”

Scott-Morgan’s husband Francis shared what it’s like to live with a human cyborg.

“He is still the same Peter. His body has changed but his brain, like a fine wine, gets better with age. And his strength and bravery, the way he’s dealt with his condition, as well as his kindness — they’re all intact.”

IN CASE YOU'RE WONDERING – no, that isn't Biological Peter. It's a very early version of my Peter 2.0 photorealistic avatar! In other words, going forward, this will be the REAL me!!! https://t.co/BIBkz7rG8J

Francis, who is trained to change the tubes that go into Peter’s throat and bladder (“I’m not fazed at all.”), added that while they are very different people, the two complement each other very well.

“He’s always been able to lose himself for hours on his computer, while I’ve only just mastered the TV remote control,” he said. “But the difference now is that I can just plug him in so he can be fed and watered while he’s working.”

As for how his life is, well, VERY DIFFERENT from a regular human being, Scott-Morgan points out, “For instance, I can eat and drink while I’m asleep. I never need to get up in the night to have a pee. Indeed I haven’t gone to the loo for years.

“But I’m hydrated 24/7. I can breathe perfectly well with a wet flannel pressed over my mouth and nose. The common cold can’t take hold and can never spread to my chest. And I can talk clearly with my mouth shut [via his avatar] in potentially any language.”

He also doesn’t plan on losing his battle anywhere soon.

“The most amazing feeling, my greatest cause of unrelenting optimism, is that thanks to the explosive growth in computing power, every couple of years that I cheat death, my ability to enjoy life thanks to high-tech will double,” he says. “That’s a thousand times the power by 2040!”

Scott-Morgan also sees his current situation as a blessing, not a curse.

“Without MND we’d have enjoyed ourselves but achieved little,” he says. “With MND — bizarrely, totally unexpectedly, magically — we may be able to help rewrite the future of what it means to be disabled. How do you weigh a trade-off as gargantuan as that?”