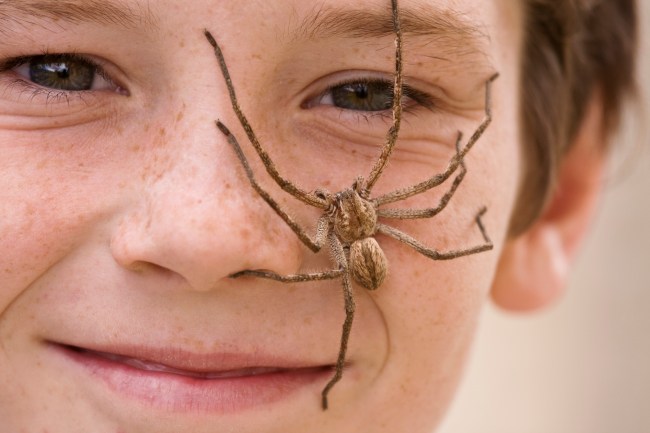 Australia is the Florida of the Pacific. Or Florida is the Australia of the United States of America. It’s definitely one of those two things. But I’m not here to talk about Florida, I just want to remind everyone that Australia is a massive area of land that’s full of countless creatures who want nothing more than to haunt your nightmares.

Tasmania, the tiny island off Australia to the South, is just as bad if not worse when it comes to wild animals hellbent on destruction.

They’ve got deadly sharks, snakes, the world’s most venomous octopus, and they have spiders that are so large they can swallow a frickin’ possum. A couple were on a road trip through Mount Field National Park in Tasmania when they happened upon a Huntsman Spider the size of a frisbee sucking down a pygmy possum like it was nothing.

The picture was shared on a Facebook page and that post has since blown up with several thousand shares and comments:

Some people are in complete disbelief and suspect that this was photo was set up by the couple and both creatures are dead. That is not the case. This spider is just THAT big and it’s hungry enough to eat a damn possum.

I didn’t have any plans to visit Tasmania in the near future and I’m not sure that’s going to change after seeing this. I’m not the type that’s going to run from spiders. One of the coolest experiences I’ve had was hunting for tarantulas at night with a guide in the Costa Rican rainforest but this isn’t that at all. These Huntsman spiders are next-level big and I’m going to give them their space on the other side of the planet.