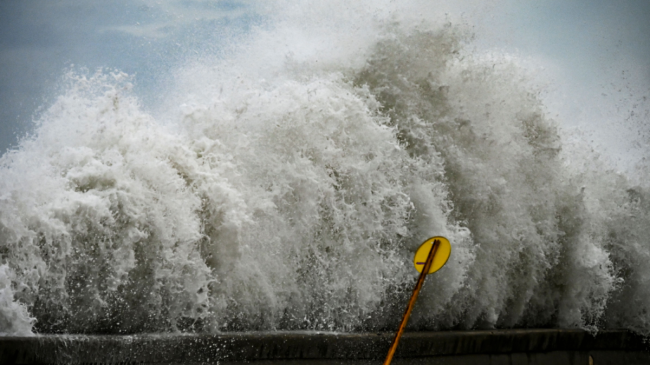 Hurricane Ian is ripping through the Gulf of Mexico, preparing to make landfall in the state of Florida. The storm is bringing extreme weather conditions to the US, with high winds and heavy rains.

Tampa Bay is already seeing some of the effects of Ian, with the hurricane sucking areas around the famous Bayshore Boulevard completely dry.

As Ian nears, precipitation is beginning to fall down on reporters, who continue to track the storm and give updates to antsy viewers at home. One thing that doesn’t necessarily mix is rain and electronics, which can make things a bit difficult on those weather crews filming on location.

One Tampa area news station is using a foolproof method of keeping that equipment dry as they report on the hurricane.

“Safe sets” are key when delivering news to viewers at home, and the NBC Channel 2 News team in Southwest Florida is taking no risk in keeping their equipment dry. The crew is covering their microphones with condoms as they report on Hurricane Ian, with anchor Jeff Butera sharing the hilarious tactic on social media.

** WE PRACTICE SAFE HURRICANE REPORTING ** Yes, it’s a condom. Nothing better to waterproof a microphone. My Waterman Broadcasting colleague Kyla Galer has been fielding lots of questions. Moment of levity in this nasty storm…

The hysterical form of protection is getting attention online. Check out the immediate internet reaction below.

One viewer wrote, “A reporter for NBC Channel 2 in Southwest Florida uses a mic with a condom on it.”

WTF? Reporter for @NBC2 in Southwest Florida uses a mic with a condom on it. #Hurricane #hurricaneian pic.twitter.com/O7TsRBp7Ez

Another posted, “Only in Florida! They put condoms over microphones during a hurricane,” after seeing the newscaster cover the storm.

Only in Florida! they put condoms over microphones during a hurricane pic.twitter.com/xaqrEgf7NJ

It certainly gives a new use for the contraceptive; one I didn’t think I’d see when I woke up this morning. “Hurricane Ian gave us a new use for condoms.”

Hurricane Ian gave us a new use for condoms pic.twitter.com/AIrwHC0UU9

Seems to be working so I definitely won’t knock it. Honestly, I’m impressed with the ingenuity.