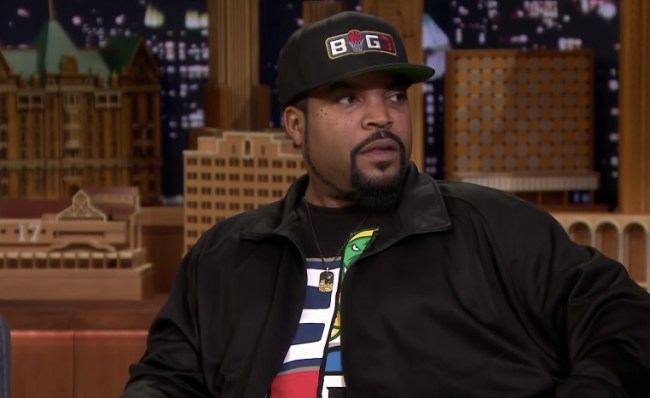 Rapper Ice Cube is a co-founding member of N.W.A. with Eazy-E, Dr. Dre, MC Ren, and DJ Yella. Ice Cube actually has the distinction of being the only founding member of N.W.A. who wasn’t born in Compton. Ice Cube’s real name is O’Shea Jackson Sr., and he was a guest on The Tonight Show Starring Jimmy Fallon last night where he talked about when his family uses his rapper name versus his real name, and when people should use his rapper name versus his real name.

For anyone under the age of around ~20, it has to be impossible to fathom that Ice Cube was once one of the realest rappers in the game because these days he spends his time acting in movies like Ride Along, Ride Along 2, and Ride Along 3. But I get it, acting in these films has boosted his personal net worth to somewhere around $150 million.

Here’s O’Shea Jackson Sr. talking about when his family uses his real name, and why his son should be name dropping more often. He also discussed becoming the first rapper to perform at the Sydney Opera House and his new BIG 3 basketball league which is blowing up this Summer:

I caught the BIG 3 basketball league on TV last weekend at the bar with someone who had never heard of it before. For real, this is a complicated endeavor for Ice Cube. It was a pain in the ass just to explain it to someone, I can’t even imagine being Ice Cube and having to pitch this to investors.