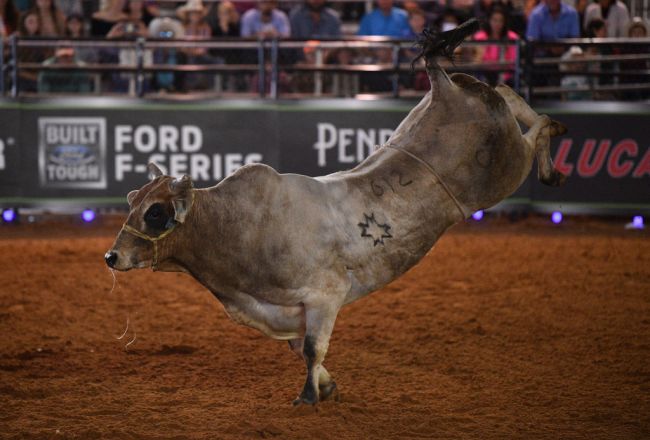 You never know what you’re going to see at a rodeo and something crazy is always bound to happen. That was certainly the case at the ‘That Famous Preston Night Rodeo’ in Idaho last week.

After throwing off his rider, a bull was roaming free in the arena when things took a heart-stopping twist. The massive bovine hopped the fence and charged at fans in the stands.

After heading toward the exit gate, the 2,000-pound bull turned back and charged toward the crowd. Fortunately, a safety cable kept the giant animal from going completely into the stands.

When the safety cable snapped, the bull dropped back down into the arena and exited through the open gate. Nobody, including the bull, was injured.

It certainly made for a scary moment.

As the bull ran toward the spectators, one man decided to take matters into his own hands. He grabbed his pistol and wielded it toward the charging aggressor.

A wild picture shows the ballsy fan ready to pull the trigger.

Needless to say, the photo drew a lot of different reactions.

One commenter said the man is “someone you want around in an emergency.”

“Not really… I want someone who is aware that it’s going to take more than that pistol to drop that ball and gets people out of the way to safety instead of trying to draw down on a bull,” another replied.

In response, a third commenter added: “Why do you think the bull changed his mind and backed off?”

It was certainly an instinctual move that couldn’t be more Idaho.