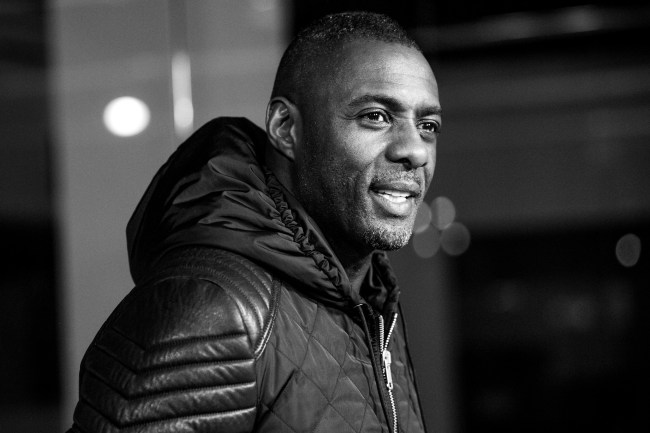 British actor Idris Elba has been nominated (and won) Golden Globes, Emmys, BAFTAs, and countless other awards. He’s appeared in the Marvel Cinematic Universe as Heimdall, as Charles Miner in The Office, Stringer Bell in The Wire, and Mumbles in RocknRolla.

He was in Prometheus, Molly’s Game, The Dark Tower, Pacific Rim, and countless other films. You know him. He’s famous as all hell, a truel A-List Actor. But one thing that plagues his career is every time someone talks about Daniel Craig vacating the role of James Bond after the next film someone says PEOPLE‘s ‘Sexiest Man Alive’ Idris Elba is next.

He’s not. He’s denied this in the past. Despite his protestations, his name is *always* attached to the James Bond role. In a recent interview with the Daily Mail, Elba discussed why he’ll never take the role of 007 no matter how many times his named is attached to rumors.

We’ve met a few times before, which perhaps explains why the often-wary Elba today indulges yet more questions about Bond. He’s been a favourite to replace Craig since 2014, after leaked documents from Sony revealed that Amy Pascal, co-chair of the company, said: ‘Idris should be the next Bond.’ There’s been a growing clamour for the first black Bond, but his odds on joining Her Majesty’s Secret Service seem to have faded over the past few months, with Bodyguard’s Richard Madden now the favourite to take over.

Today, Elba seems keen to distance himself from the intense speculation. ‘Bond is one of the biggest franchises in the world, and for that reason, whoever ends up playing it, lives it. You’re THAT character, and known as that character for many, many years. I’m creating characters now that can still live alongside Idris. Not ones that take over me and solely define me.’

It sounds as categorical a denial of the rumours as he’s ever given. He tells me he’s more excited about another action role – more anti-hero than hero. ‘The Hobbs And Shaw character Brixton Lore is brilliant. Awesome. I’d love to see that franchise up and running, but it wouldn’t define me,’ he says adamantly. (via Daily Mail)

It makes perfect sense, doesn’t it? I’m sitting here trying my hardest not to look at IMDB and see what other roles Daniel Craig has played because the only role I can think of him in right now is James Bond. It’s almost as if his career as an actor didn’t exist in my mind until that role.

With that said, I don’t think this would actually be the case for Idris Elba. He has an extremely respectable body of work already from serious films and TV to lighter roles. I don’t think that playing 007 would be the defining mark of his career even if it would eventually be his biggest achievement in film.

The entire interview over on the Daily Mail is pretty good. You can follow that link and check out the bit about how Idris DJ’d Prince Harry and Meghan Markle’s wedding after ‘his friends’ William and Harry made a special request that he spin tracks at the after party.