If you’re a frequent reader of this website, you probably know by now that a couple of us really love Phish around here. I write this post riding the good vibes of a steamy two-night run at Hershey – a hometown venue for me. My brother and I were lucky enough to take our mom, a retired music teacher, to her third Phish show on night one. She had a blast – Gumbo, Llama, and Lizards all being highlights.

Hershey Night Two? I have some attendance bias, but it definitely hails high on my Mt. Rushmore of great Phish shows I’ve been lucky enough to attend in the modern era (3.0? 4.0?).

My highlights: Opening up with You Sexy Thing, super funky overtures in the Halley’s Comet jam, a spacy Gotta Jibbo, Meat, a Birds Of The Feather that blasted into orbit, a Ruby Waves jam that toppled the Alpine Ruby Waves as an improvisational masterpiece.

It was a great time with family and friends, both old and new.

I lay all this out because it leads nicely to my excitement for a new podcast in the increasingly crowded Phish podcast universe. It’s called Blackberry Jams Presented by Ben & Jerry’s. It’s a podcast, produced by public media organization PRX, that dives into Phish fandom and explores the experience of Black Phish fans.

PRX is a powerhouse when it comes to producing high-quality, narrative-driven audio content. Their shows and podcasts include This American Life, The World, 99 & Invisibile, Ear Hustle, the immensely popular podcast Welcome to Night Vale, and Over The Road, a podcast series about long-haul truckers and the stories that come with it.

Blackberry Jams will be co-hosted by co-creators Lenny Duncan and Leslie Mac.

I think the project is so exciting for a lot of reasons. Phish is for everyone.

That said… If you’ve ever been to a Phish show, it’s impossible to ignore the glaring lack of diversity and general homogeneousness of those in attendance. You can see it in the crowd shots on any Phish live stream.

In my experience, ethnographically, Phish shows are usually much, much whiter than any sporting event, including, (but not limited to!) hockey, NASCAR, and golf. Heck, I’m pretty sure they’re whiter than most Taylor Swift concerts at this point.

The glaring whiteness of the Phish crowd is basically a bit to many-a Phish fan at this point. It plays into one’s overall self-depreciation about the greater jam band scene at this point, dating back to days of the Goold Ole’ Grateful Dead. Think: the hundreds of thousands, if not millions, of people who found an identity and community in the scene a la Lindsay Weir running off to go on tour at the end of Freaks And Geeks.

Perhaps it’s from the intense musical whimsy that’s baked into the experience, but Phish tends to be a moth-to-a-flame for a certain kind of a self-aware liberal arts crowd that’s not uncomfortable with acknowledging this lack of diversity.

Yet at the same time, it’s a fan experience that so many in the world of Phish are unfamiliar with, about a thing they’re very familiar with. I think it’s awesome that Blackberry Jams is going to explore this. Here’s the show’s description:

Welcome to “Blackberry Jams Presented by Ben & Jerry’s,” a new podcast that dives into Phish fandom and explores the experience of Black Phans. The series pulls back the curtain on how jam band culture and Black liberation work intersect, envisioning a community filled with liberation, love, and Phish tickets by mail for all. Co-created and co-hosted by Lenny Duncan and Leslie Mac, “Blackberry Jams” will launch on Tuesday, August 31. And if you have a Black Phan show story to share, dial 888-PHAN-JAM (888-742-6526) to leave Lenny and Leslie a message!

As a teenager, the first Phish song I ever played for my dad, also a music teacher and big jazzhead, was “Stash”, off of A Live One. I’ll never forget his comment – “It sounds very white, but at least it’s not as boring as soft jazz.” Heck, even the band members themselves joked about sounding like “James Brown on a bad night” in Bittersweet Motel.

The 10-episode series will run weekly through Tuesday, November 2 on all the big podcast platforms, including Apple Podcasts, Google Podcasts, Spotify, and Amazon Music.

A few more details from the press release:

“As a well-known Black Woman organizer and strategist, so much of my life is on display––my experiences as a Phan have been life-affirming and a self-care safe haven for me over the years,” said Mac in a press release. “I’m so excited to talk about the good, the great, and the ugly with my friend Lenny, who I’ve spent many hours dissecting everything from our favorite ‘Tweezer Reprise’ to which show venues are the most racist. Telling these stories will offer a peek into how music helps me cope with the difficulties of the world and my hopes for how this scene can change to meet the current moment.”

“The truth is that my life has been forever altered by this scene, its people, and of course the music. When America abandoned a 13-year-old Black Queer boy to its streets, a Day-Glo bus filled circus-jam-packed with dreams of revolution rescued me,” said Duncan in a press release. “This scene, this band, and others like it, have been my North Star when all other stars have long since faded. The chance to talk about it from a Black Queer perspective with Leslie is the icing on the cake. Her power analysis, organizing credentials, and educational work in anti-racism is only topped by her real compassion for those she comes across. The Black Phan experience and ‘Blackberry Jams’ are coming to a shakedown near you.”

“Ben & Jerry’s is honored to support Leslie and Lenny with ‘Blackberry Jams,’” said Jay Curley, Global Head of Integrated Marketing at Ben & Jerry’s. “We have been part of the Phish community for decades and supporting racial equity and Black liberation for many years. We are excited for Leslie and Lenny to share these stories and history with the world.”

I’m really looking forward to checking this one out. 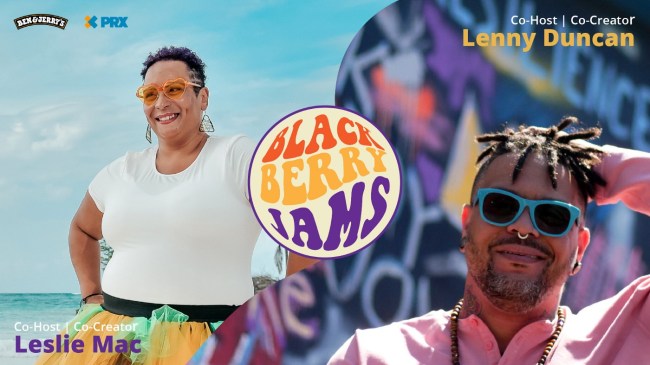 While we’re on the subject of racial equity in the Phish scene, there are some other really cool projects out there worth checking out too.

Dr. Jake Cohen, a musicologist and expert on American music history, is doing a YouTube series on the Black roots of Phish. Here’s the first episode: