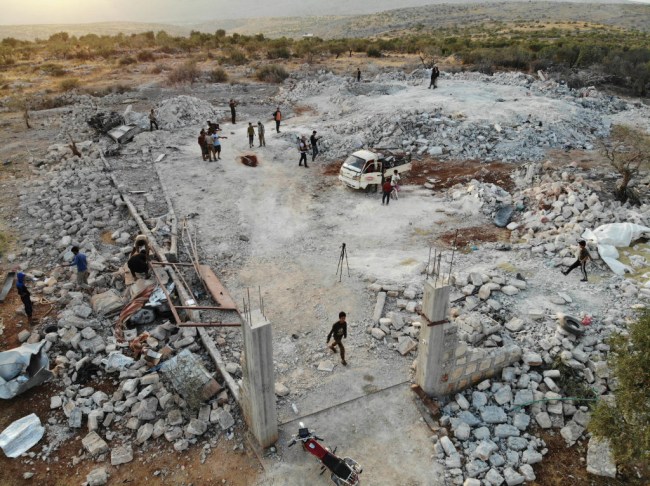 The Pentagon released a video of the U.S. Special Forces raid in Syria that took out ISIS leader Abu Bakr al-Baghdadi. The footage that was released on Wednesday afternoon at a press conference showed the nighttime raid that eventually forced the terror-in-chief to kill himself via a suicide vest.

Marine Corps Gen. Kenneth F. McKenzie Jr., commander of U.S. Central Command, narrated the video and provided a play-by-play of the events on the ground at al-Baghdadi’s compound in Syria’s northwestern Idlib province. The launch order for the top-secret mission to kill or capture the Daesh leader was given at 9 AM ET on Saturday, October 26, 2019.

“Baghdadi was the subject of an intense inter-agency effort to bring him to justice, and that effort significantly advanced recently as we closed in on his whereabouts,” said McKenzie, who was the operational commander of the Delta Force raid.

“As it became clear that we had gained fleeting and actionable intelligence on his hideout, we developed an execution level plan designed to capture or kill him and started preparing a special operations team for the mission,” the Marine Corps General said at the press conference.

"Here we see the object of the assault-the compound where Baghdadi was hiding. As I noted earlier, this isolated compound was in Idlib province in Northwest Syria" – Gen Frank McKenzie CDR USCENTCOM pic.twitter.com/VwxRJMN0rS

"…at the compound, fighters from two locations in the vicinity of the compound began firing on U.S. aircraft participating in the assault."
– Gen Frank McKenzie CDR USCENTCOM pic.twitter.com/SkrtHNDs7w

The official U.S. Central Command Twitter account tweeted out a video with the caption: “At the compound, fighters from two locations in the vicinity of the compound began firing on U.S. aircraft participating in the assault.”

“I want to make it clear that despite the high-pressure and high-profile nature of this assault that every effort was made to avoid civilian casualties and to protect children we suspected would be in the compound,” the general said.

“This operation was exquisitely planned and executed. It demonstrates the United States’ global reach and our unwavering commitment to destroy ISIS,” Gen Frank McKenzie. “This was a true inter-agency effort, so I commend our partners across the U.S. government.”

The ISIS leader’s explosive vest killed himself and two of his own small children under the age of 12 who he brought into a dead-end tunnel underneath the compound when U.S. soldiers and a military dog were in pursuit of the terrorist. Besides al-Baghdadi, four women and one man were killed in the raid.

“He crawled into a hole with two small children and blew himself up while his people stayed on the ground,” the general said. President Donald Trump said the leader of ISIS was “screaming and whimpering” while he was being chased down the tunnel.

The United States Special Forces teams were able to get a positive identification of al-Baghdadi with a DNA test that was done on the compound and provided results in 15 minutes. The leader of ISIS was then buried at sea in accordance with the Law of Armed conflict within 24 hours of his death.

"The rapid analysis showed a direct match between the samples and produced a level of certainty that the remains belonged to Baghdadi of 1 in 104 septillion."

The U.S. military took 11 children out of the compound and apprehended two men.

Special Forces obliterated and leveled al-Baghdadi’s compound so it could not be worshipped like a shrine.

"A side-by-side comparison of the compound before and after the raid."

CENTCOM Chief Gen Ken McKenzie says US forces wanted to ensure the site of Baghdadi's death would not become a shrine. pic.twitter.com/YeI6dRrW2t

During the top-secret operation, there were no U.S. casualties. Apparently, the only injury was to a military dog, which has already recovered from its wounds and returned to service.

Army Gen. Mark A. Milley, chairman of the Joint Chiefs of Staff, said that the K-9 military dog “performed a tremendous service” and was “slightly wounded” but now “fully recovered” and “returned to duty” and back “with its handler.”

CENTCOM Chief Gen Ken McKenzie just now: This military working dog, who was wounded during the Baghdadi raid, is a veteran of 50 combat missions and has returned to full duty. pic.twitter.com/5zJ2Goryxh

The Special Forces confiscated “substantial” documents and electronic devices from the compound.

CENTCOM proclaimed: “The individuals who planned and conducted this mission are quiet professionals, focused on their mission above glory or recognition. Committed people did hard, risky work, and they did it well.