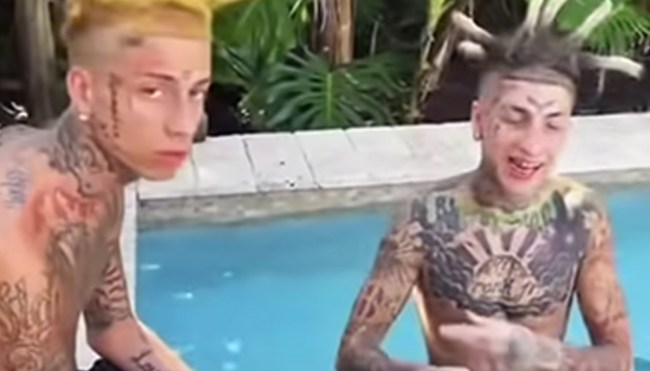 The nature of my job requires me to devote far too much of my time on this planet to combing the internet for entertainment to bring to the masses, and I’m routinely reminded about the inherently absurd nature of my occupation while attempting to tell my significant other how I spent my day.

Last month, I (like most people who encountered it) became absolutely entranced by a video featuring a couple of dudes who were quickly dubbed “The Island Boys” after a clip of the aspiring musicians known as Flyysoulja and Kodiyakredd freestyling in a pool went viral.

Thanks to the infectious nature of that earworm, I found myself unconsciously (and, according to my wife, “incessantly”) humming it over the course of the day. As a result, I found myself attempting to explain the allure of the tatted-up duo sporting hair that could be used for a game of ring toss and trying to translate their “gang gang slang” before she uttered “Um, sure” and left for another room.

I’m not going to attempt to do the same again, but for the uninitiated, the Island Boys are two fraternal twins from South Florida named Franky and Alex Venegas who’ve had dreams of being rich and famous for a good chunk of their lives.

They may have achieved internet fame, but as we’ve seen time and time again, that doesn’t always necessarily translate to actual fame—and based on what unfolded during their first-ever live performance, they’ve still got some work to do.

According to The Daily Dot, the Island Boys made their grand debut after they were invited to perform at the Miami club Liv over the long weekend, and, well, they weren’t exactly greeted with a warm reception.