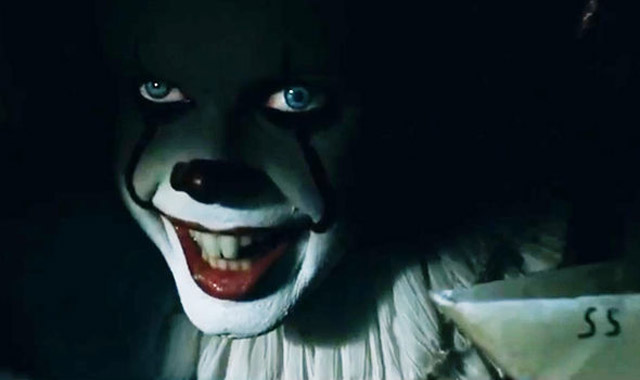 Hard to believe for those of us who have seen the movie, but there was supposed to be a scene in IT that was so disturbing the filmmakers decided to just leave it out of the the final cut.

The scene in question is the one that Bill Skarsgård, the actor who plays Pennywise the Dancing (and Murdering) Clown, mentioned when he spoke to Variety back in September.

“There was a scene we shot that was a flashback from the 1600s, before Pennywise [was Pennywise]. The scene turned out really, really disturbing. And I’m not the clown. I look more like myself. It’s very disturbing, and sort of a backstory for what It is, or where Pennywise came from. That might be something worth exploring in the second one. The idea is the ‘It’ entity was dormant for thousands and thousands of years. The [flashback] scene hints on that.”

Fast forward a month and actor Timothy Simons revealed on the Throwing Shade podcast that he actually auditioned for the role of Pennywise so host Bryan Safi decided to read some of this very same Pennywise flashback scene from a copy of the script.

Turns out that the folks over at Bloody Disgusting found the deleted scene on Reddit and they shared the entire gruesome thing from beginning to end.

It features a woman named Abigail in the year 1637 alone in a house with her baby, and well, things most definitely get “disturbing.” Here’s an excerpt…

She’s shaking, doesn’t want to let go. Behind her, the Door OPENS. A Little Boy, 6, asks — BOY: Mama? ABIGAIL: NO! OUT! NOW! Frightened by his mother, the Boy runs. Abigail turns back to Pennywise. Wherever he may be now in the room. The light somehow seems to spin faster now. She kisses her baby and sets it down. It BAWLS. ABIGAIL: I’m sorry, I’m so sorry…

She turns away from the baby. Faces those dying embers. We keep on her face as they seem to begin GLOWING BRIGHTER AS — OVER HER SHOULDER — OUT OF FOCUS — Pennywise crawls over to the Baby and starts to feast. SHARP CRY FROM THE BABY CUT OFF as we hear a CRUNCH. Abigail continues to look into the BRIGHT ORANGE GLOW of not the flickering fire… …but the DEADLIGHTS. Her expression changing. Fear. Denial. Grief. Acceptance. And then nothing. Just a glazed look. AS IF NOTHING HORRIFIC IS ACTUALLY HAPPENING BEHIND HER.”

According to one person who says they saw a screening of the movie back in April, this scene was actually shot…

Saw the screening back in April, there was one bone chilling scene of Pennywise in the 1800s in the form of a horned demon. I’ve been waiting for that scene since, just got home from seeing it and it wasn’t there ): explanation below.

Mother looking for her daughter, while holding a newborn. She hears the scream of her daughter inside the cabin house in a field. Runs in, and stops immediately. All you see are glowing yellow eyes, horns, and his grey arm on the wall in the corner, and his other arm wrapped around her. The mom asked who he is and what he’s doing, he proceeds to tell her how he is not from this world, and is the eater of worlds. Then he barters with her, let him have his meal, or watch the newborn baby die and she’ll die too. So suddenly she turns around and faces a fire pit engulfed in flames, while you hear a girl screaming, bones breaking, and blood being gulped while the camera zooms in on the mothers face.

His voice was so deep and terrifying. The log cabin can be seen in the song scene, showing Ben in the library staring at a framed picture of the cabin on the wall.

If true, then Bill Skarsgård might be right when he says it could be something they explore in the second film. Too bad we have to wait until 2019 to find out.