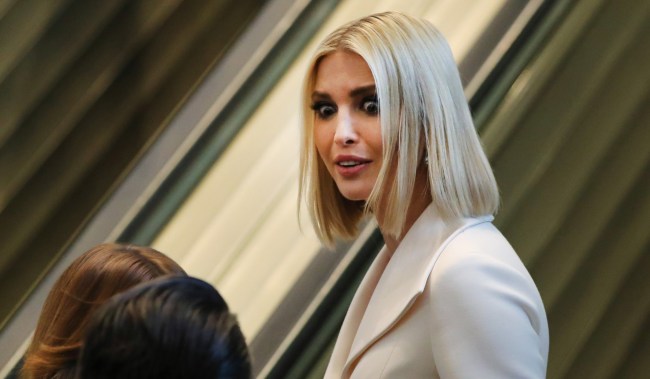 Earlier this week we learned that Ivanka Trump, on at least one occassion, allegedly farted and blamed it on someone else, which, of course, only served to make us actually find her more appealing.

The story of Ivanka’s furtive flatulence came from a lengthy Vanity Fair article written by Lysandra Ohrstrom, who met Ivanka when they were both in seventh grade and was, according to Lysandra, her best friend as they attended the fancy pants all-girl prep school Chapin in Manhattan.

Ohrstrom, who was one of two maids of honor at Ivanka’s wedding to Jared Kushner, spills a lot of tea in the article titled “Ivanka Trump Was My Best Friend. Now She’s MAGA Royalty.”

Besides Ivanka’s penchant for following the law of whoever smelt it dealt it, Ohrstrom also claims that the President’s daughter had a deep dislike for poor people.

As she’s touted the achievements the Trump administration has made for the middle class while not-so-covertly pursuing a massive wealth transfer to corporate America, I’ve been reminded of a phone call we had in our mid-20s. Ivanka always solicited book suggestions from me, and I had recently recommended Empire Falls, Richard Russo’s 2001 Pulitzer Prize–winning novel about the life of a diner manager in a working-class community in Maine. “Ly, why would you tell me to read a book about fucking poor people?” I remember Ivanka saying. “What part of you thinks I would be interested in this?”

When Eric Trump posted a photo on Twitter of a mansion supposedly belonging to Joe Biden and wondered how a politician could afford such a house, I thought about how Ivanka used to point out inconsistencies between a character’s profession and their lifestyle when we went to the movies. “Since when can a teacher afford a BMW?” she would ask, munching on her usual small popcorn, coated in what would be an unpalatable amount of salt to a normal person. Or, “Why is a police officer living in a house like that?”

Not that Ivanka was above lowering her standards at times, as Ohrstrom, who also comes off as more than a little bit of an elitist, pointed out in the article, “She always stopped at McDonald’s for cheeseburgers. She cursed.”

Wow. What a rebel.

Excuse me while I go throw up from reading this entire piece of supercilious, out-of-touch drivel.