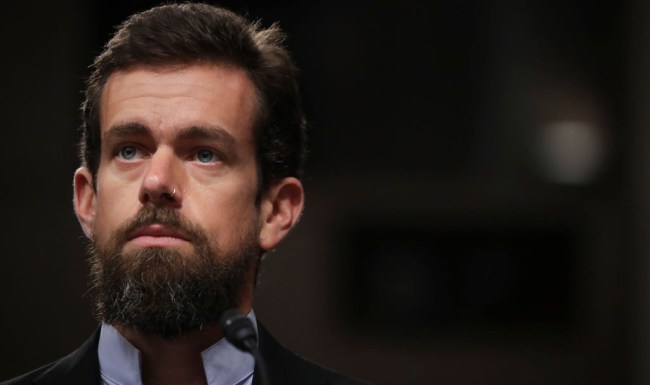 Twitter CEO Jack Dorsey, along with Facebook COO Sheryl Sandberg, have been testifying before the Senate Intelligence Committee about very important topics affecting the internet, so of course, the internet being the internet, it used his crucial testimony to turn his beard into a meme. Way to go, once again, internet.

Dorsey and Sandberg are in Washington to face charges that their social media platforms favor liberals and meddled with the 2016 election. Google, however, was represented by this empty chair.

While we have an empty chair for @Google at today’s hearing, I’m encouraged that @Facebook and @Twitter have chosen to constructively engage today and to publicly answer some difficult questions from the Intelligence Committee. pic.twitter.com/AjFT2UWiLP

“We don’t consider political viewpoints, perspectives, or party affiliation in any of our policies or enforcement decisions. Period,” Dorsey told the Senate on Wednesday. “Impartiality is our guiding principle.”

“(We) found no statistically significant difference between the number of times a tweet by a Democrat is viewed versus a Republican, even after our ranking and filtering of tweets has been applied,” Dorsey continued.

Twitter shares fell 6 percent on Wednesday and Dorsey shared on Twitter how stressed the Senate hearing was making him on Tuesday with a screenshot of his Apple Heart app which showed his heart rate spike at 109, well over his resting heart rate of 44 beats per minute. 44 BEATS PER MINUTE?! Is he an Olympic marathon runner in his spare time?

Heart rate during a Senate and House hearing pic.twitter.com/LipSHa3xIi

And while all that was going on, affecting the stock market, the internet, elections, and well, most of America, many on Twitter have been more focused on the fact that Dorsey was rocking one seriously majestic beard during the hearing.

Jack Dorsey with a Playa beard, nose ring, and no tie reading off an iPhone in front of the Senate Intel committee will be one of those indelible images in the history books for when the Valley’s mythos finally ran out.

Jack Dorsey's collar, beard, and "Yeah, I did it myself at home—why do you ask?" haircut make him look like a disgraced intergalactic council member in Star Wars or something pic.twitter.com/ejiQAG0k4t

Jack Dorsey looks like he'd start a speech at an elementary school with, "You think marijuana is funny? Yeah, I thought it was funny too" pic.twitter.com/QSxW2P1jsu

Imagine being as rich as Jack Dorsey and choosing to have *that* beard. They didn't even show Catweazel in America. pic.twitter.com/i0AlHrwi6d

Jack Dorsey has the beard of a man who hangs out in pool halls until 3AM and takes shots of Jameson like it's morning juice. https://t.co/heiMlhm3Up

The beard is svelte.

The aggressive goatee aside, I've never seen a dress shirt with a collar like this.

Rep. Barton said @jack doesn't look like a CEO with his beard.

"My mom would agree," Dorsey replied.