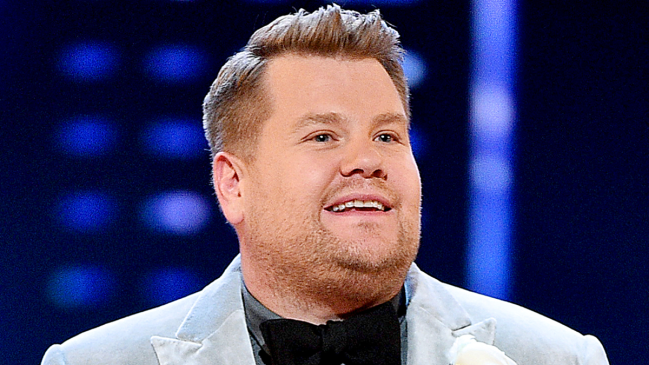 Earlier this year, James Corden announced his plans to leave The Late Late Show in 2023, a development that was met with reactions ranging from deafening indifference to borderline jubilation after Americans learned they’ll no longer have to tolerate the man who replaced Craig Ferguson on the CBS program in 2014.

Corden’s tenure is essentially defined by the unavoidable “Carpool Karaoke” clips that have buoyed a show that would otherwise have no real pop culture impact to speak of—one helmed by a man who has had trouble garnering much favor among viewers thanks to his fairly unremarkable brand of comedy, penchant for attention-seeking stunts, and the fact that he might’ve been the worst part of the crime against cinema that was Cats.

Nothing sums up Corden’s reputation quite like the fact that most people in his native United Kingdom seemed to have one of two reactions when he announced he’d be taking his talents to The Late Late Show  close to a decade ago: “Good riddance” and “He’s America’s problem now.”

You also don’t have to search too hard online to find plenty of anecdotes from people who say they’ve had the misfortune of encountering him in public, and while it would be foolish to make any sweeping generalizations about Corden’s personality based on the testimony of anonymous strangers on the internet, one fairly noteworthy figure has opted to go public with some new allegations that are the textbook definition of “A Bad Look.”

If you’ve ever worked at (or frequented) a dining establishment that tends to attract some famous clientele, then you’re likely aware of the steps many restaurants take to try to keep celebrities happy—even if it comes at the expense of their employees or bottom line.

New York City’s Balthazar might not be the hot spot it once was, but it still fits that particular bill. As a result, it’s hard to ignore what owner Keith McNally had to say in an Instagram post where he publically announced his decision to ban Corden from the French brasserie in SoHo following a string of alleged incidents that paint the talk show host in some terrible light.

McNally—who dubbed Corden a “tiny Cretin” in the post—shared two examples from the restaurant’s manager log while explaining his rationale, and, well, it’s hard to blame the restauranter if they did unfold as described.

The first involved Corden’s (again, alleged) decision to wait until he finished his meal to complain about a hair before demanding a free round of drinks on top of the ones he’d already consumed.

That might sound unreasonable, but it has nothing on what McNally says unfolded when Corden’s omelet was *gasp* prepared incorrectly during brunch. 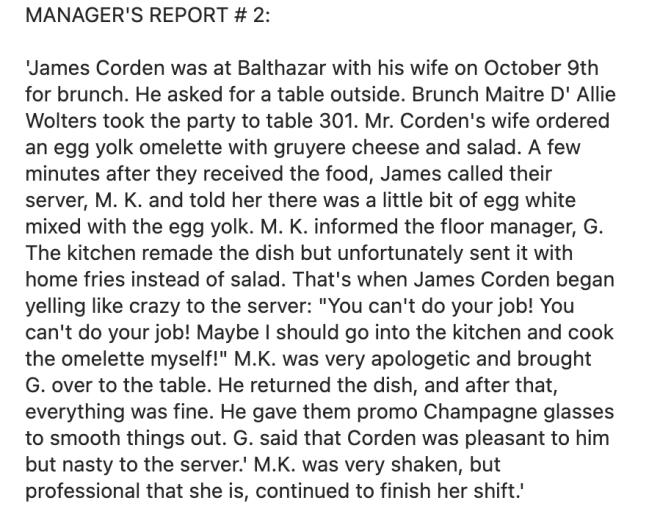 There are obviously two sides to every story, but it’s hard to imagine McNally would’ve gone as far as he did here if he wasn’t very confident in his accounts.

The ban didn’t last long, as McNally revealed Corden called to apologize shortly after the initial post went viral and opted to rescind it.