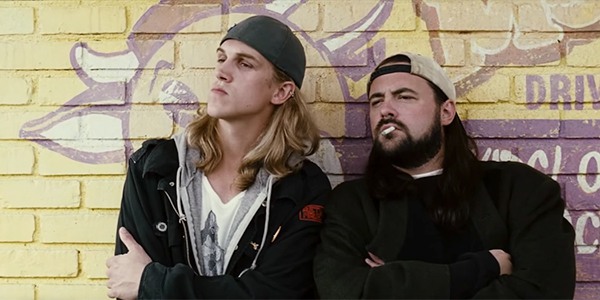 It’s 2019, and Jay and Silent Bob are no longer selling drugs outside the Quick Stop. They are now budtenders because they are done being so suburban since it’s the new millennium. At least next week they will be budtenders. In an Instagram post, Kevin Smith announced that his star characters of Jay and Silent Bob Reboot will debut three strains of weed with very appropriate references from the View Askewniverse.

Wanna buy weed from @jayandsilentbob? I’m ecstatic to announce that we’ve teamed up with @caviargoldmed (makers of my favorite weed in the world) to bring you an Indica called Snoogans, a Sativa called Snoochie Boochies, and a Hybrid called Berzerker – each powered by #caviargold! The 3 Strains of Gold are a plot point in #JayAndSilentBobReboot, so it was my dream since starting the script to have the three fake strains available in the real world by the time the movie hit theaters! So I salute my man Caviar Mike, who made life imitate art by creating our 3 Super Strains! And now, to introduce our weed to the world, @jaymewes and I will bud-tend at @theherb.la a week from Friday on 9/27! We’ll sling smoke and snap selfies starting at 4:20pm!

But if you aren’t able to make it to the debut of the Jay and Silent Bob weed, don’t fret because the comedy-themed marijuana will be “available at over 420 dispensaries across California, Arizona, Michigan and Oklahoma (and coming soon to Missouri, Illinois, Florida, and Nevada)!”

“And thanks to an inspired stroke of genius from Mike, each pre-roll contains a Berzerker Jay comic written by me and drawn by @starktoons! Collect all 10 comics and trade them in for a free pre-roll anywhere Caviar Gold products are sold,” the Instagram said. “After 25 years of selling smoke on the big screen, lemme sell you some smoke IRL – Sept. 27th at the Hollywood Herbarium! #KevinSmith #JasonMewes #weed #weedporn #marijuana #jayandsilentbob #herbarium #budtender #budtenderlife.”

This isn’t the first time that Smith has mentioned Caviar Gold cannabis. In August at a Jay and Silent Bob Reboot panel at San Diego Comic-Con and said that Caviar Gold is “f*cking the best!”

While "Jay and Silent Bob" was at @Comic_Con, @ThatKevinSmith does give @CaviarGoldMed a shout-out! #jayandsilentbobreboot

Hopefully, the weed will only cost 15 bucks, little man. But just remember to put that sh*t in Jay’s hand. If that money doesn’t show then, you owe me, owe me, owe. My jungle love. Oh e-oh-e-oh.