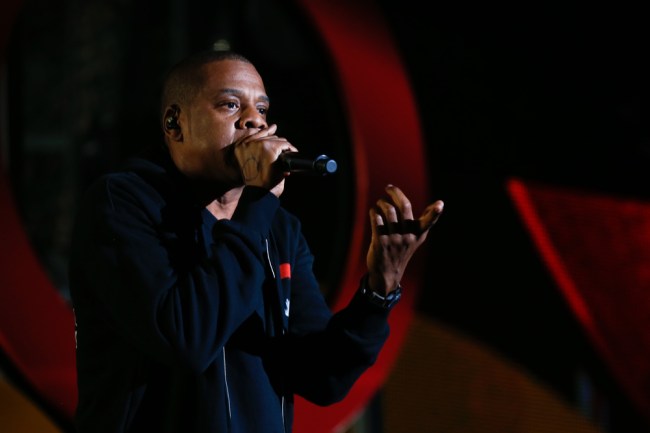 Jay-Z had one heck of a weekend celebrating the birthday of Juan ‘OG’ Pereze, the President of Roc Nation Sports and a close friend of Jay’s. Instead of heading to Los Angeles for the NBA All-Star Game festivities, Jay-Z opted to party in Manhattan and celebrate his friend’s birthday while spending somewhere in the range of $110,000 throughout the night at various clubs.

According to Page Six, the night started with a $13,000 dinner at Zuma in Midtown Manhattan where Jay-Z picked up the tab. Then they went to Made in Mexico where they dropped an additional $9,000 on drinks which included Jay’s D’Ussé cognac. After that, the crew headed over to Playroom where they bill topped $91,000 after tips.

The Hip-Hop mogul forked over a literal fortune for Ace of Spades Gold champagne (which he owns) but presumably still had to pay the club for. There were only 6 of them partying but Jay-Z still managed to plow through FORTY bottles of the Ace of Spades Gold Champagne:

Jay Z tab at Playroom last night. I’m just gonna cry in poor for the rest of the day. 😭 pic.twitter.com/q2OhOoi3YS

If that Twitter picture of the bill above isn’t showing up for you then you can access it directly here.

$11,100 tip on an $80,000 bill? I mean, that’s obviously one of the most generous tips you could ever hope to receive but at the same time, it’s not even 15%. I don’t blame Jay-Z for tipping under 15% because $11,100 is a comically generous tip when all the people had to do was carry out some champagne with sparklers and get the club going.

I’m just making note of this because people on Twitter Moments are discussing Jay-Z not tipping 15%. Frankly, $2,000 is enough when all the person is doing is carrying out bottles of champagne and working for like 30 minutes but I understand the optics of it aren’t ideal.