Jeff Bezos Divorce Has Been Finalized, Here’s How Much Of Amazon MacKenzie Bezos Controls 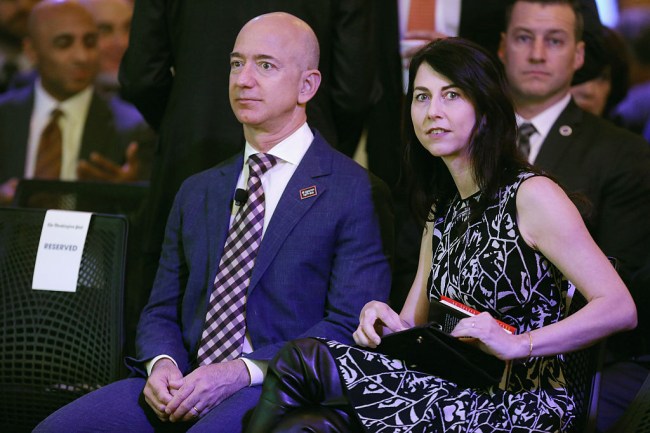 Amazon CEO Jeff Bezos and MacKenzie Bezos have finalized their divorce after 26 years of marriage. MacKenzie Bezos, born MacKenzie S. Tuttle, announced that a divorce settlement has been reached with a tweet on Thursday afternoon.

Jeff will retain all his interests in the Washington Post and space company Blue Origin, as well as 75 percent of the shared stock in Amazon. The Amazon CEO will also keep voting control over his ex-wife’s shares. MacKenzie, who is a writer, said she will “support his continued contributions with the teams of these incredible companies.”

“Grateful to have finished the process of dissolving my marriage with Jeff with support from each other and everyone who reached out to us in kindness,” MacKenzie Bezos wrote. She said she was “excited about my own plans” and was “grateful for the past as I look forward to what comes next.”

Jeff and MacKenzie got married in 1993 and have four children together. She said the couple said they looked forward to their new relationship as co-parents.

“I’m so grateful to all my friends and family for reaching out with encouragement and love. It means more than you know. MacKenzie most of all,” Jeff wrote three months ago when he announced their divorce. “I’m grateful for her support and for her kindness in this process.”

Jeff Bezos made headlines after his relationship with his mistress Lauren Sanchez was exposed and they were together while they were both were still married.

At the time of publication, Amazon’s stock is trading at $1,813.02, which makes MacKenzie’s shares worth $35.6 billion and Jeff’s at $107.4 billion. Before the divorce, Jeff Bezos’ net worth is 149.2 billion and is the richest person in the world. The Bezos’ own over 400,000 acres of property. If MacKenzie is only getting 25 percent of Amazon, then she had better be getting a few Bezos mansions otherwise her divorce lawyer failed.