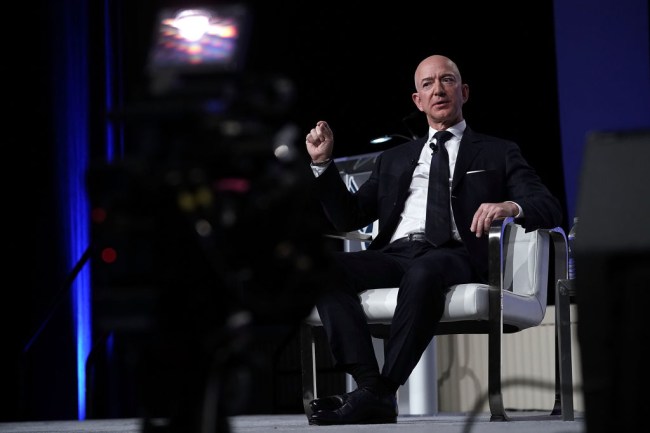 Jeff Bezos has made explosive allegations that the National Enquirer attempted to extort him by threatening to post “intimate” photos of the Amazon head. On Thursday night, the world’s richest person wrote a blog post to outline the allegations against the tabloid publication.

Bezos posted a blog on Medium (which seems a little odd since he owns an entire newspaper that would sure love the clicks from a story this big) to detail the extortion attempt by the National Enquirer. The blog post is titled “No thank you, Mr. Pecker,” a reference to David Pecker, the chairman and CEO of American Media Inc., which owns the National Enquirer, Star, Sun, Weekly World News, Globe, Men’s Fitness, Muscle and Fitness, Flex, Fit Pregnancy, and Shape. Yes, the man synonymous with packages is upset that Pecker wanted to post pics of his penis. 2019 is already glorious.

The National Enquirer is the publication that first reported that Bezos was cheating on his wife MacKenzie and having an affair with his mistress, Lauren Sanchez. The National Enquirer posted racy text messages from Bezos to Sanchez such as: “I love you, alive girl. I will show you with my body, and my lips and my eyes, very soon.”

After the leaked text messages were released, Bezos had his own team of investigators start an investigation to find out who shared the intimate messages with the supermarket tabloid. In the investigation’s early going, they believe that a culprit could be Lauren’s brother Michael Sanchez. He has vehemently denied the accusations.

The National Enquirer said they tracked Bezos and his mistress “across five states and 40,000 miles” in a “four-month investigation.” The National Enquirer allegedly also has intimate photos of Bezos and according to the Amazon CEO used them to blackmail him. Bezos apparently wrote the Medium blog post to get ahead of the story and so they couldn’t tip off the public or post the nude photos.

A few days after hearing about Mr. Pecker’s apoplexy, we were approached, verbally at first, with an offer. They said they had more of my text messages and photos that they would publish if we didn’t stop our investigation. My lawyers argued that AMI has no right to publish photos since any person holds the copyright to their own photos, and since the photos in themselves don’t add anything newsworthy. AMI’s claim of newsworthiness is that the photos are necessary to show Amazon shareholders that my business judgment is terrible.

Bezos acknowledges that there very well could be nude pics of him out there. “Of course I don’t want personal photos published, but I also won’t participate in their well-known practice of blackmail, political favors, political attacks, and corruption,” Bezos said. “I prefer to stand up, roll this log over, and see what crawls out.”

Bezos went so far as to include the alleged communication from someone named “Dylan” reportedly from AMI, which includes descriptions of the explicit photos that the National Enquirer is said to possess. It’s a bold strategy, Cotton. Let’s see if it pays off for him.

“In addition to the ‘below the belt selfie — otherwise colloquially known as a ‘d*ck pick’’ — The Enquirer obtained a further nine images. These include: Mr. Bezos face selfie at what appears to be a business meeting. Ms. Sanchez response — a photograph of her smoking a cigar in what appears to be a simulated oral sex scene. A shirtless Mr. Bezos holding his phone in his left hand — while wearing his wedding ring. He’s wearing either tight black cargo pants or shorts — and his semi-erect manhood is penetrating the zipper of said garment. A full-length body selfie of Mr. Bezos wearing just a pair of tight black boxer-briefs or trunks, with his phone in his left hand — while wearing his wedding ring. A selfie of Mr. Bezos fully clothed. A full-length scantily-clad body shot with short trunks. A naked selfie in a bathroom — while wearing his wedding ring. Mr. Bezos is wearing nothing but a white towel — and the top of his pubic region can be seen. Ms. Sanchez wearing a plunging red neckline dress revealing her cleavage and a glimpse of her nether region. Ms. Sanchez wearing a two-piece red bikini with gold detail dress revealing her cleavage. It would give no editor pleasure to send this email. I hope common sense can prevail — and quickly.”

“Well, that got my attention. But not in the way they likely hoped,” Bezos wrote. “Any personal embarrassment AMI could cause me takes a back seat because there’s a much more important matter involved here. If in my position I can’t stand up to this kind of extortion, how many people can?”

Apparently, AMI doesn’t want hush money or anything like that. According to Bezos, the AMI people want Jeff to call off his investigation into who released the text messages, which is led by Jeff’s private security consultant Gavin de Becker. AMI reportedly also want Bezos to “make the specific false public statement to the press that we ‘have no knowledge or basis for suggesting that AMI’s coverage was politically motivated or influenced by political forces.'”

Bezos alleges: “If we do not agree to affirmatively publicize that specific lie, they say they’ll publish the photos, and quickly. And there’s an associated threat: They’ll keep the photos on hand and publish them in the future if we ever deviate from that lie.”

The National Enquirer and Donald Trump have had a cozy relationship, while Bezos and the 45th President of the United States have had their battles. Bezos is insinuating that President Trump may have had the National Enquirer snoop around for dirt on the Amazon head. To be fair, Bezos’ own publication the Washington Post did snoop around for dirt on President Trump during the presidential campaign.

If Bezos was cheating on his wife MacKenzie and sexting Lauren Sanchez nude photos, that certainly will not help the richest person in the world in divorce court. Does Bezos have a case against the National Enquirer? Beats me, I’m no legal eagle. But Renato Mariotti is and he was a former federal prosecutor turned CNN legal analyst. He provides some important context on whether a crime was committed in this insightful Twitter thread.
‏

THREAD: Did the National Enquirer and its parent company commit a crime or otherwise break the law in its recent actions towards Jeff Bezos? https://t.co/mPA0wwPZZB

2/ As background, Bezos and his wife recently announced that they are getting divorced. This announcement appears to have something to do with the publication by the National Enquirer of texts and other evidence that Bezos had an affair with another woman.

The subject of Bezos's post is something that happened after.

6/ The terms were written by a Deputy General Counsel for AMI (the parent company), and they were sent *after* a descriptive email from AMI's Chief Content Officer describing in graphic detail the private photos and messages that AMI had in its possession.

8/ The terms explicitly stated that if Bezos didn't abide by the deal, AMI could publish the material.

To be clear, when I say "terms," I'm using a legal word–this is drafted as if they are terms in a settlement agreement between AMI and Bezos. That is important.

10/ What is extortion? Typically it's when someone demands money in exchange for keeping something embarrassing private. While we ordinarily have a First Amendment right to say whatever we please, it can be a crime to threaten to say something unless money is paid.

12/ AMI would surely argue that this is a legitimate settlement of its dispute with Bezos. They realize that Bezos has claims against them, and perhaps they could make claims against Bezos or the Washington Post. The agreement would release those claims.

Is it consistent with some of the questionable practices that AMI engaged in on behalf of Trump and others? Yes.

But is this the sort of case federal prosecutors would charge as extortion? No.

16/ You can make those arguments, but it would be a very hard trial to win. And that's without considering a potential First Amendment defense. AMI would also have an advice of counsel defense, because those terms appear to have been drafted by a lawyer.

18/ But if this wasn't a crime, it doesn't violate the agreement. It does shift things to an extent because prosecutors could claim that this was a crime and use that to void the Non Prosecution Agreement.

20/ (If they did, they would spend a lot of resources fighting with AMI just to have the right to bring criminal charges against individuals at AMI that they were willing to forego bringing in the first place. Not a good use of prosecutorial resources.)

21/ As I mentioned earlier, moves like this are fairly common when there are legal disputes between people or companies as a way for one side to gain leverage over the other. It is despicable but I have had no success convincing federal prosecutors to bring charges. /end