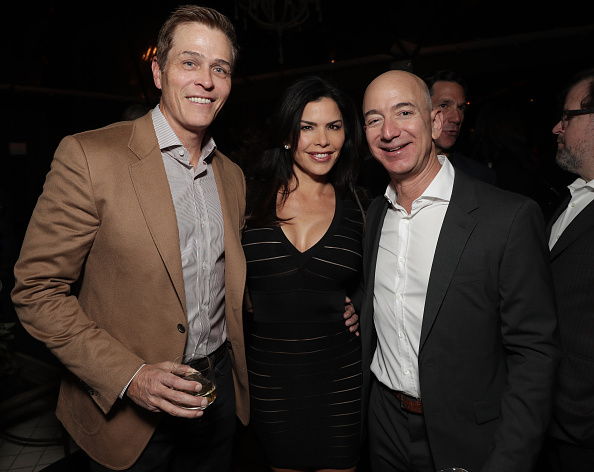 Yesterday afternoon Amazon billionaire Jeff Bezos took to Twitter to announce that he was getting divorced to his longtime wife Mackenzie.

It was later reported that Bezos was having an affair with Lauren Sanchez, the wife of his neighbor and good friend Patrick Whitesell.

Bezos, 54, and Sanchez, 49 — who is also a helicopter pilot — got to know each other through her husband, an agent to stars including Matt Damon, Christian Bale, Kevin Costner and Hugh Jackman

Today the National Enquirer is revealing that they were somehow able to get their hands on text messages sent from Bezos to Sanchez during their affair.

Via The National Enquirer

Jeff Bezos was sending his mistress sleazy text messages and gushing love notes in spring last year — months before Bezos and his wife announced on Twitter that they were separating.

The National ENQUIRER can reveal the Amazon founder — worth an eye-watering $144 billion — waxed lyrical to his mistress, Lauren Sanchez , the wife of powerful Hollywood talent agent Patrick Whitesell , in April 2018.

Here are the two text messages obtained by the Enquirer.

In one message o Bezos wrote: “I love you, alive girl. I will show you with my body, and my lips and my eyes, very soon.”

In another pillow talk exchange, on May 13, the horn-dog billionaire wrote: “I want to smell you, I want to breathe you in. I want to hold you tight.… I want to kiss your lips…. I love you. I am in love with you.”

The text messages, which could come to bite Bezos in the ass if his ife takes him to court, apparently came months before both Bezos and Sanchez were separated from their spouses.

A lawyer representing Bezos claimed to The ENQUIRER that it was “widely known” Jeff and MacKenzie Bezos had been “long separated.”

A source close to Sanchez told The ENQUIRER they had separated from their spouses “in the fall.”

The text messages, however, were seemingly sent before the summer.

The Internet had a bit of fun with Bezos’ text messages to Sanchez.

“I have a billion dollars” should be the only text Jeff Bezos ever sends to anyone ever https://t.co/Sjh7nnjYtw

Most expensive words ever spoken worth 25 billion

Bezos wanna breathe you in. Homeboy is Kirby pic.twitter.com/d3hhZxXBSx