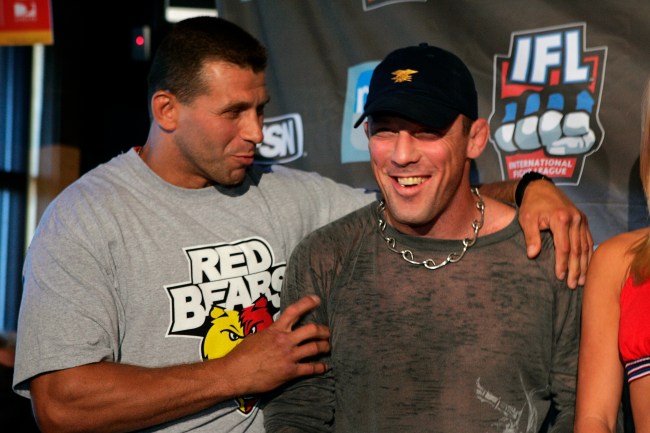 Jeffrey Epstein’s death has many unanswered questions and many people are turning to conspiracy theories to try to make sense of the bizarre situation. A person very close to Jeffrey Epstein, his former bodyguard, gave an interview where he detailed his own conspiracy theory about the convicted pedophile’s mysterious death while in federal prison. But before the bodyguard gave too many details about his former boss, he nervously warned the interviewer to not “put yourself in trouble” and to “just be careful.”

Igor Zinoviev is a mixed martial arts trainer, but in the late 90s, he was a UFC fighter. He appeared in only one fight, which was at UFC 16, where he was destroyed by Frank Shamrock in only 22 seconds. Zinoviev retired from professional MMA in 1998. After his fighting career, Zinoviev was the bodyguard, driver and trainer for Jeffrey Epstein.

Igor, who is originally from St. Petersburg, Russia, worked for Epstein for “five or six years.” Zinoviev drove Epstein around while Epstein was serving a 13-month sentence with work release where Jeffrey could leave Palm Beach jail. Epstein pleaded guilty to a charge by the state of Florida of procuring for prostitution a girl below age 18 on June 30, 2008.

Zinoviev also trained Epstein in weightlifting and fighting drills. Igor was also Epstein’s bodyguard and accompanied the disgraced financier on trips to his private island in the U.S. Virgin Islands, even took flight’s on Jeffrey’s now-infamous private jet, which has since been labeled as the “Lolita Express.”

Journalist M.L. Nestel said he interviewed Igor Zinoviev in 2015, when he was working at the Daily Beast. But he said his interview with Igor went unpublished. Nestel tracked down Igor and interviewed the former bodyguard again, but this time Zinoviev was much more careful about the accusations he made about Epstein and seemed to give off a vibe that anyone investigating the Epstein case was in danger.

“To be honest, I didn’t expect that he’d try to back away from the assertions he made in our original interview — but he did,” Nestel wrote. “He also seemed, it is safe to say, quite nervous about saying anything at all.”

Zinoviev was asked what he thought about Epstein’s death and replied, “Somebody helped him to do that.” When asked why he thought that Epstein died by an assisted suicide, Igor responded vaguely, “Listen, you know, that’s going a little too deep.”

When Igor was asked if he thought his premature death would happen to Epstein, Igor said, “It’s unexpectable. Well —.”

When asked about how he was feeling about Epstein’s potentially suspicious death, he said, “I’m not sad. I mean, I didn’t have anything against him, like a bad thing, you know? I don’t care about his life completely.”

Zinoviev declared that “nobody ever wanted to offer me money. I don’t care about money. I want everybody to just leave me alone.”

The writer claims that in the 2015 interview Igor told him about Epstein having teenage girlfriends, however Zinoviev completely denies that assertion now.

But Nestel alleges that Zinoviev had a different response in 2015. “So many time I tried to stop him. I try to tell him my opinion about that,” Igor reportedly said in 2015. “He don’t listen to me. That’s the reason why I’m not working for him no more. I make him do that — to let me go.”

“He has so much money he can pay it off,” Zinoviev allegedly told the Nestel in 2015. “Me personally, if I caught him with my daughter or something do that — I’m not going to go to police. I do something else. Much worse. That guy could try to sue me and manipulate the situation with his money. That’s the American way.”

In the current-day interview in NY Mag, Igor has a completely different story. “All what I say he has always been with girlfriends and there was a couple girls — I don’t remember their names. She was 25 and worked for him as assistant. Maybe 25 or 23 — whatever, I don’t know the age.”

“I never see teenage girls in my life at his house. That’s what it is. That’s a misunderstanding. Completely,” Igor said in the latest interview. “That’s because — that’s what I’m saying.”

When Igor is asked if he is “worried about the local cops,” he responds in a very cryptic manner. “Listen, you’re really smart and I’m not going to offer that over the phone right now, okay? You’re really smart. You have no idea. Please!”

“But just be careful. I’m not kidding,” Igor tells him. When asked about what email he could contact Igor at, he replied, “Don’t do any kind of that stuff. Just don’t play it. Seriously.”

You can read the entire interview with Jeffrey Epstein’s former bodyguard over at New York Magazine.