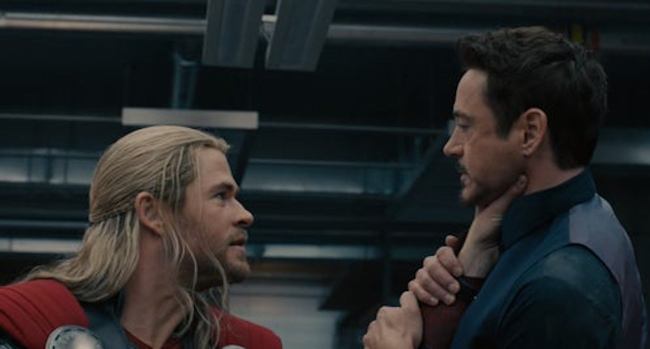 Imagine being as rich, successful, and handsome as Robert Downey Jr. and *still* being intimidated by someone else? There likely aren’t many men on the planet that could make you feel insecure about yourself, but Chris Hemsworth is certainly one of them.

During a recent episode of the Armchair Expert podcast, Jeremy Renner — who was one of the original six Avengers in the Marvel Cinematic Universe alongside Downey Jr., Hemsworth, Chris Evans, Scarlett Johansson, and Mark Ruffalo — told a hilarious story about the first time they met the Aussie God of Thunder and how Downey Jr. joked that they should “break his knee” to level the playing field.

“If you ever played any sports, it was like joining a new team. I knew Robery Downey Jr., I knew Scarlett Johansson, I just didn’t know Chris Hemsworth,” Renner said of making 2012’s The Avengers.

“From what I hear, he’s a pretty great guy,” Dax Shepard, the host of the podcast, replied.

“Yeah, he’s amazing, but we didn’t know, right? On the first day, we’re all waiting around in our costumes. It looks like it’s Halloween. We’re excited but equally feeling ridiculous. I feel like we all knew each other somehow, someway, except for this Hemsworth guy, because he comes from Australia. And he’s the tallest, the most good-looking… Downey was like, ‘We gotta break his knee. We gotta take him out. This guy’s too good-looking. He’s too tall, he’s too charming, fuck this guy.'”

Downey Jr. obviously has an eye for talent, as Hemsworth has not only gone on to become one of the biggest movie stars in the world but will be the first actor to get a fourth solo film in the Marvel Cinematic Universe when Thor: Love and Thunder hits theaters on July 8.

Renner can most recently be seen playing Clint Barton in the Disney+ series Hawkeye. In addition to that show, he’s also currently starring in the Paramount+ series Mayor of Kingstown, which was created by Yellowstone mastermind Taylor Sheridan.