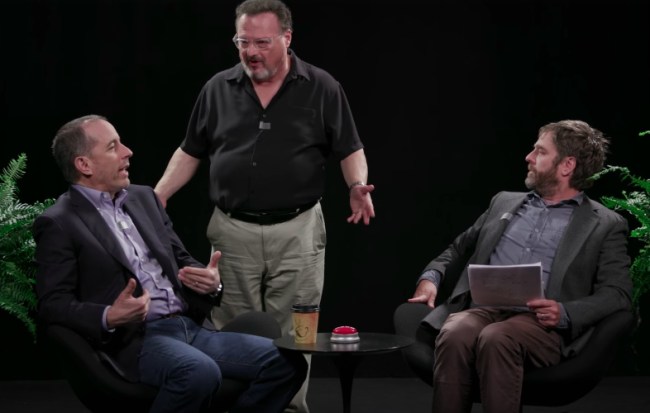 More than a decade ago, Zach Galifianakis sat down with Michael Cera for the inaugural episode of his painfully uncomfortable “talk show” Between Two Ferns. Since then, he’s landed interviews with people ranging from Tila Tequila to Barack Obama and mastered the art of awkward comedy in the process.

While new episodes came out fairly consistently after it first premiered, production eventually began to slow down, and we’ve only been treated to three new installments in the past four years (the most recent one was with Hillary Clinton in 2016 before that whole “election” thing). Thankfully, that all changed today when a brand new Between Two Ferns dropped out of nowhere, and I’m glad to inform you it’s been more than worth the wait.

The newest guest/victim is Jerry Seinfeld of Bee Movie fame, who sat down with Galifianakis for a conversation filled with the all of the passive aggressiveness we’ve come to expect. However, Seinfeld wasn’t the only person to pop up during the episode, which featured appearances from a long-time friend (or foe, depending on how you look at it) in addition to another surprise cameo.

It also has a button that plays the Seinfeld theme, which is something I didn’t know I needed in my life until now.

I did not wake up this morning expecting to see a video featuring Jerry Seinfeld sitting on a milk crate next to Cardi B, but I’m very glad it exists. Here’s to hoping we don’t have to wait another two years for the next one.