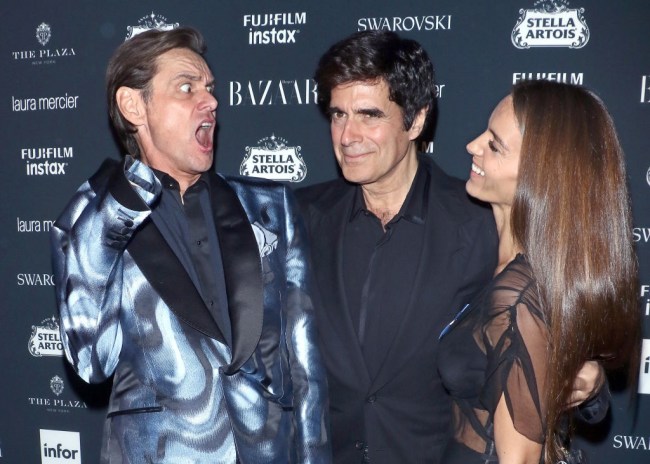 Back in April, Jim Carrey uploaded a photo of himself sporting the kind of beard you’d expect from someone who reportedly took five grams of shrooms to prepare for a role as psychonaut Terence McKenna for an upcoming biopic. He appeared on Jimmy Kimmel Live a month later and shared that he had to deal with mites that he got while feeding birds bugs from his mouth. He might not have reached Gary Busey levels of crazy, but it seems like he’s coming close.

Although he recently shaved his beard, it appears that the most prolific comedic actor of the 1990s (sorry Adam Sandler) has had his third eye permanently opened thanks to his psychedelic trip— at least based on a crazy interview he gave on the red carpet with E! News at a Harper’s Bazaar‘ fashion week party.

Well, you definitely can't say that Jim Carrey gives a boring interview: "There is no me. There's just things happening." pic.twitter.com/HatQ6mHsKp

Carrey opens the interview with a clearly overwhelmed Catt Sadler by saying he only showed up to the event because it was “the most meaningless thing” he could find. The remainder of the exchange is filled with bizarre, philosophical quotes (and one random James Brown impression), including:

“I don’t believe in personalities. I believe that peace lies beyond personalities, beyond invention and disguise, beyond the red ‘S’ you wear on your chest, that makes bullets bounce off.”

“I don’t believe in icons,” added the comedy icon who had clearly dressed up for and made the decision to attend a party honoring icons.

Maybe this is all a stunt to drum up publicity for his new film. Maybe he’s channeling his inner Andy Kaufman and messing with all of us to entertain himself. Maybe he’s the poster child for the downside of ingesting too much psilocybin.

Whatever the explanation, I just hope we haven’t lost the old Jim Carrey for good.