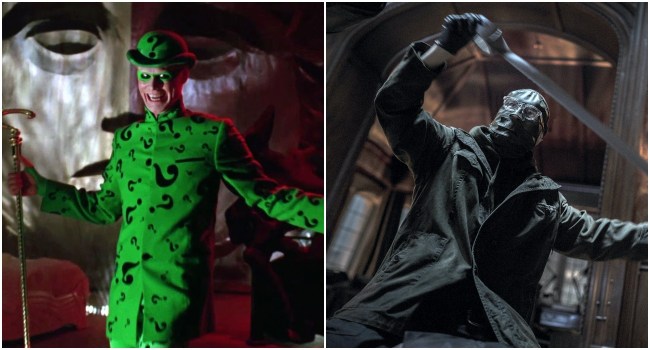 Prior to Paul Dano’s portrayal of the sadistic Gotham City rogue in The Batman, the last time that Riddler was seen on in big screen Batman film was almost 30 years ago when Jim Carrey played the character back in 1995’s Batman Forever.

In a recent interview with UNILAD, Carrey discussed Dano’s take on the iconic Batman villain, saying that he has “mixed feelings” about it because he’s worried that “sickos might adopt” some of Riddler’s methods.

“I’ve not seen it. It’s a very dark version. I have mixed emotions about it. To each his own and all that,” Carrey told UNILAD. “I love him [Paul Dano] as an actor, he’s a tremendous actor. There’s a spot of worry in me over gaffer-taping people’s faces and encouraging people to do the same. Some sickos out there that might adopt that method.

“I do have a conscience about the things I choose. Robotnik [his Sonic 2 villain] has cartoon bombs and no one gets hurt. I know there’s a place for it, and I don’t want to criticize it, but it’s not my kind of thing… it’s very well done, those movies are very well done.”

All respect to Carrey — who was literally my favorite actor when I was growing up — but this is the same thing people said about having fears of Joaquin Phoenix’s Joker inspiring similar violence, which ultimately never occurred. Evil people are going to be evil regardless of whether or not they’ve seen the latest Batman movie. Plus, director Matt Reeves already said Riddler was based on the likes of the Zodiac Killer.