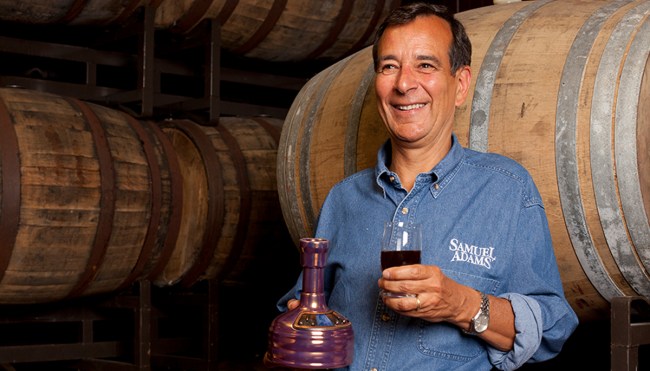 Over the past decade or so, people across the United States have scrambled to get a piece of the craft beer pie in a country that is currently home to around 9,000 breweries compared to the approximately 2,250 that were officially open for business in 2011.

It’s safe to say the current landscape looks it bit different than it did when Jim Koch decided to try his hand at making beer in the mid-1980s. In fact, the term “craft beer” hadn’t even been coined when the Boston native and three-time Havard graduated abandoned his job as a consultant in the hopes of making a living as a brewer on the back of a family recipe that served as the basis for what would be dubbed “Samuel Adams Boston Lager.”

At the time, the beer industry in the United States had reached a historical nadir when it came to the number of companies dedicated to producing it. After being crippled by Prohibition, the country boasted an all-time low of 89 breweries in 1978—a number that was still hovering just below 100 by the time Koch officially founded the Boston Beer Company in 1984.

However, he would play a pivotal role in drastically changing American’s conception of what beer could be, and while almost all of the contemporaries that helped him lead that initial charge have been largely lost to history, Sam Adams still remains a force to be reckoned with almost four decades after Koch brewed up the first batch of Boston Lager in his kitchen.

I recently got the chance to join Koch for a virtual tasting of the hallowed Sam Adams Utopias—a 28% ABV behemoth that can’t legally be sold in 15 states—and was also lucky enough to hop on Zoom for a one-on-one conversation where he provided some fascinating insight into the rise of Sam Adams and the craft beer revolution where the industry veteran was essentially a five-star general who led the charge.

The Start Of Sam Adams 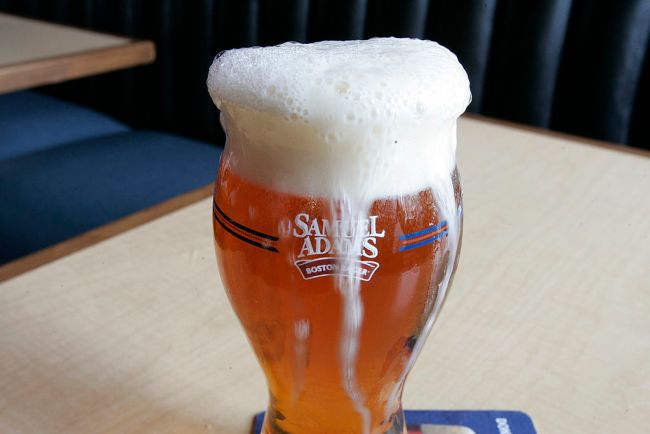 “I have an unusual craft beer journey in that I come from a family of brewers. My beer journey started when I was four or five when my dad gave me my first beer.

My dad and I actually homebrewed before it was even legal. It was kind of a father-son project. We went to the grocery store and bought some cans of Blue Ribbon malt extract. He got some hops and yeast from a brewmaster who was a friend of his, and we made beer at home.

So I was kind of born into this. My dad left brewing when all the little brewers were consolidating or being driven out of business, and then I had a different path. I’ve got a J.D. and an MBA from Harvard, so I was able to get an education that my dad didn’t have access to. 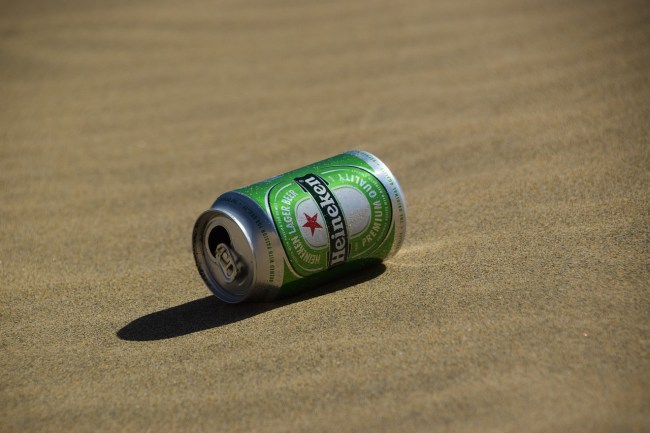 “At that time, American beer was a complete wasteland. The high end of American beer was Michelob. My dad gave me a recipe from my great-great-grandfather, Barry, that became Sam Adams Boston Lager. At first, the company was two people. We started with a goal to get to 5,000 barrels in five years and level off. That was enough to have eight employees and I could pay myself $75,000 a year, (which was probably closer to $150,000 today).

That was ambitious; nobody was really at that size among the handful of craft brewers that were out there. I thought that was a big deal. Instead of five years, we hit that number in eight months. We got picked as the best beer in America at the Great American Beer Festival, and that was a watershed moment in that it made people realize that there were quality differences in beer.

When I started, beer was just…beer. It was like soft drinks. Nobody argued whether Coke had better quality ingredients than Pepsi, and no one who drank beer really cared which brewmasters had a better brewing process.

That win blew up that soft drink mentality. It said, ‘Beer is an art.’ The quality of the ingredients, the character of the process, the passion of the brewer; those are all important things that should be thought about and talked about with respect to beer. That was really the fundamental idea of craft beer: that there was such a thing as better beer out there.

Everybody thought great beer’ was Heineken and Becks and Stella, so I had to educate people and say, ‘Well, these are kind of the mass-produced beers of Europe.’ They just had fancy names and green bottles…and a skunky taste.”

The Origins of the Term “Craft Beer” 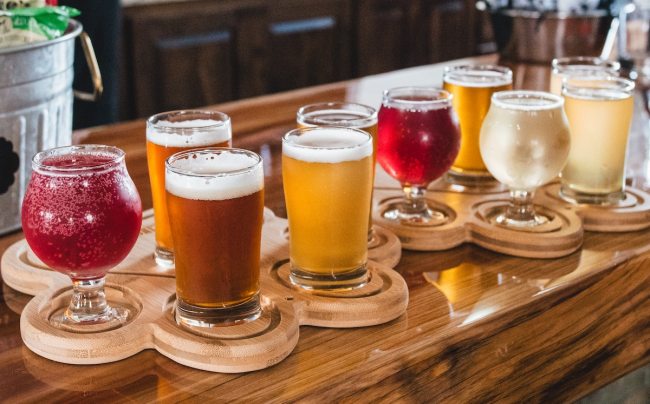 “It took a while to kind of strip away that mystique. At first, we were called ‘microbrewers,’ but we were all searching for a better term. Michael Jackson, the great beer writer, wanted to call them ‘specialty beers,’ but that kind of sounded like boutique lingerie or something.

We’d been putting ‘handcrafted in small batches’ on our bottles. A beer writer named Vince Cottone shortened it to ‘craft beer,’ and that really started to take hold in the late ’80s and early ’90s. Craft beer was going through its first boom, and one of the things we were doing was bringing variety to the American beer drinker.

Jackson had identified around 60 different unique styles, and that gave us all a pathway to grow and to experiment. You could just look up a beer style, and if you thought it was interesting, you could make it. In many cases, they weren’t being made—and were maybe never made—in the United States, so we started pushing new ingredients.

For example, we took a Lambic, which is a Belgian beer that was typically made with raspberries or cherries or even peach. We said, ‘Wait a minute. This is a unique taste; it’s a bit sour and it has some acetic acid in it and a low pH.’ Well, cranberries have a big,  explosive, tart fruit flavor, so we did a cranberry lambic.”

Continuing to Push The Limits of Beer 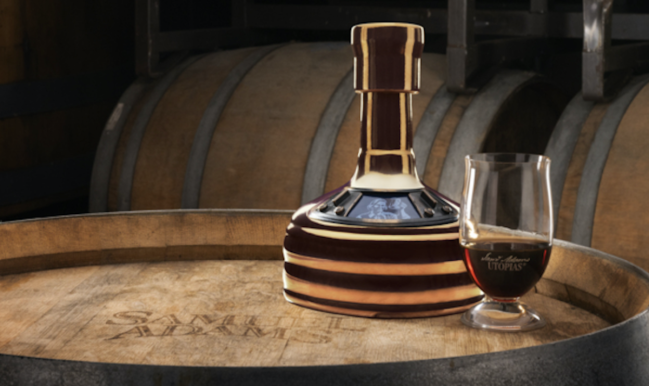 “Eventually, the idea of pushing the boundaries of alcohol began to intrigue me. I still feel this way. There are cool, cool beers out there that have not yet been made, and we want to be one of the breweries that makes them. Making beers that haven’t even been imagined has been really at the DNA of Boston Beer Company since the very beginning.

That’s how we got to Utopias. At that point, nobody believed you could get the alcohol over about 14.5% ABV. There was supposedly just some sort of natural limit, but I realized we could push the fermentability of the grain up significantly and breed the yeast through natural selection to keep it viable and healthy in a high alcohol environment.

From there, we became the first brewery to experiment with barrel-aging, and the rest is history.” 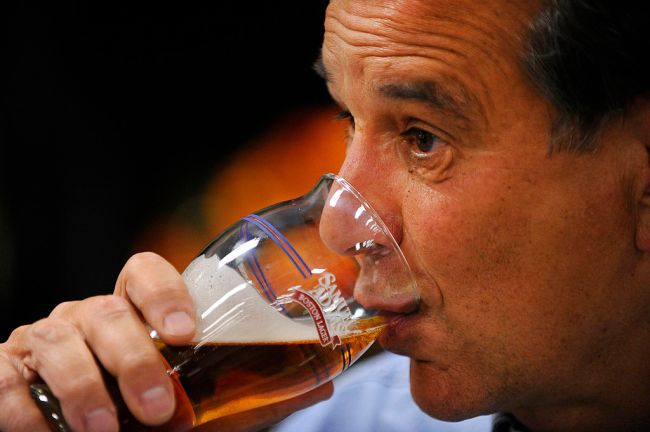 When you open my refrigerator, you’ll find Boston Lager, which is also tapped in my kegerator right now with Wicked Hazy. And then I have my Utopias.

We have played around with heat in beer in the sense of adding spices and peppers, and I’m just not a fan of it. We’ve had and have brewers that like it, but my view has always been we’re not going to release a beer until I like it.

At one point, we ended up doing a variation of our Chocolate Bock; a Chili Chocolate Bock. We never really released it outside of the brewery until we found what I thought was a really pleasing way to bring the heat: cinnamon. So, instead of using that hot pepper heat, we used the heat from cinnamon. That actually got a gold medal at the Great American Beer Festival.

So yes, our Cinnamon Chocolate Bock was delicious, but it can trace its origins back to beers I just didn’t want to drink. That heat did not belong in beer.” 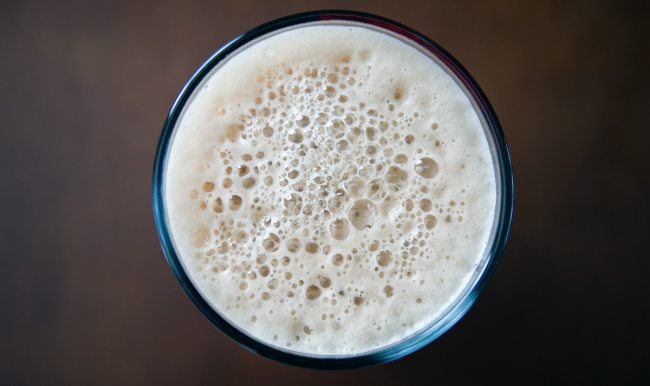 “I think it’s super exciting. It’s a dream come true to have, what, 9,000 breweries in the United States? It just fortifies America’s position as the best place in the world to be a beer drinker and as the origin of the best beers made in the world. As someone who watched it evolve from a wasteland to a paradise, I couldn’t be happier.

It used to be I knew every other craft brewer in the country. Now I don’t even know every craft brewer in Eastern Massachusetts. That’s a good thing. It’s such a fertile time. It certainly presents exciting challenges in the sense of trying to come up with new beers that aren’t duplicative of what’s already out there, but the bar has been raised and that’s cool.

When it comes to the ‘bubble,’ it’s not a bubble any more than the enjoyment of good American wine is a bubble. It’s here to stay. It’s a choice that people didn’t used to have, and now that they do, nobody is going back.

American craft brewers are making some of the best beers in the world. That’s a very compelling proposition to consumers. It’s something you don’t get anywhere in the rest of the world. It’s not only high-quality beers but a profusion of varieties and styles, which means you’ll never get bored.

What’s really happened is that the growth we’ve seen inevitably had to taper off. For the first 10 years of the existence of Sam Adams, we grew 65% a year. We were doubling every 18 months. That wasn’t gonna keep going; otherwise, we would have ended up with a 100% share of the world economy. It would have been a lovely thing, but that’s not going to happen.

I think what you’re seeing now is a maturing craft beer growth. It’s been all messed up because of the pandemic and the shutting of craft brewers and beer bars and so forth, but what you have is a very stable industry that’s still very exciting. The size of the box may not grow, but what’s inside the box is constantly changing and evolving 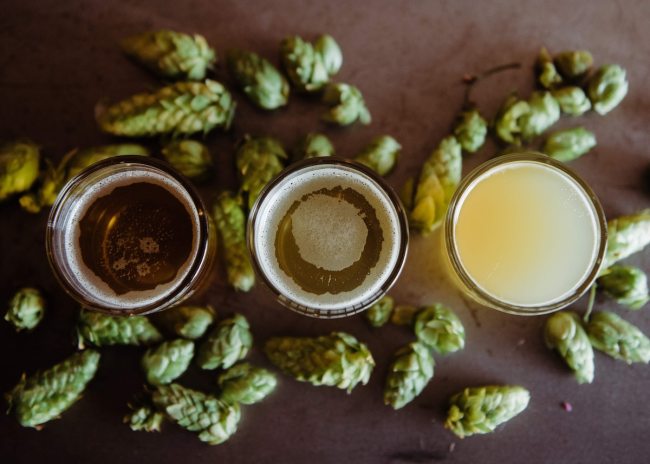 “To me, ‘craft beer’ is a high-quality, flavorful beer that comes from an independent brewer as opposed to one owned by a big brewer or liquor company. I think it’s actually close to The Brewers Association’s definition. There’s a certain spirit that’s harder to define, but all you really have to do is go into a craft brewery and talk to someone who makes the beer there.

It’s just a different conversation than you’ll have with the head of Diageo or Miller Coors. You just know you’re in a different world.”

Parts of this interview have been edited and condensed for clarity.

If you enjoyed this article, be sure to check out some other discussions we’ve had with brewers who helped shape the craft beer industry, including: