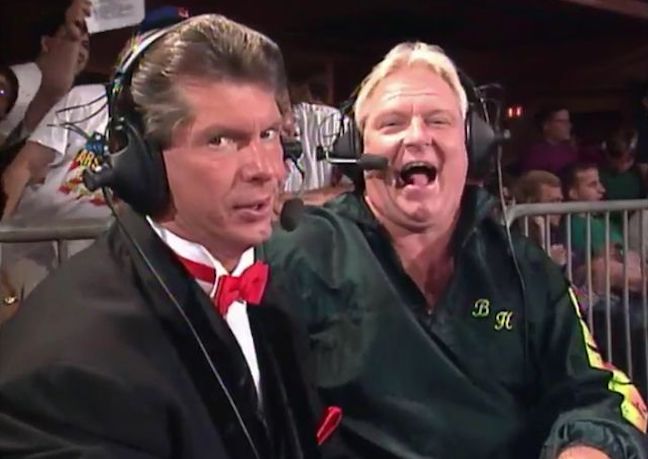 On September 17, 2017, the world lost Bobby “The Brain” Heenan to organ failure due to complications from throat cancer that had been in remission since 2004.

To honor the wrestling legend, Jim Ross did an entire episode of “Grilling JR” reflecting on the life and legacy of Heenan.

Ross and Heenan were incredibly close friends, becoming tight during Ross’s first stint with the WWE back in the early 90s. The pair hosted a syndicated show together and traveled together, along with Gorilla Monsoon.

Ross was the wheelman for the legendary pair for a few months before Heenan jumped to WCW.

“Grilling JR” host Conrad Thompson asked Ross about Heenan’s relationship with Vince McMahon. Heenan was constantly pulling pranks and ribbing performers and the owner of the company was the target of Heenan pranks on countless occasions.

Ross recalled one recurring prank on McMahon that he’s not even sure McMahon knew Heenan was behind (pun intended).

“Bobby always had a lot of fun with Vince. One of Bobby’s favorite things to do was, he got to TV early, to syndicated shows that were on location, on the road. Every building had a sign that said ‘Vince’s office.’ There would always be a line of talent during the day, literally like they’re lining up in the Army. A long line of people.

Bobby would get there early, long before Vince and his entourage would arrive, and this was the days when toilets wouldn’t flush automatically. You had to manually flush the toilet.

Bobby would wait and wouldn’t have his morning constitution at the hotel. He waited until he got to the building to take a dump with the hopes of creating quite the visual in his stool.

So he would go into the bathroom in Vince’s office, do his business, and not flush. And Vince’s reputation is being very clean – a germaphobe maybe – with all the things we’ve heard about the sneezing and not eating food with his hands.

Bobby would go in there, take care of his business, and leave all of the evidence.”

Ross went onto explain that one of his jokes to Heenan might have put an end to the shitty prank.

“I told him one day ‘you know what he’s going to do, don’t you? He’s going to get one of his stooges to pull that turd out of the toilet and they’re going to do a DNA test on it.

I stopped him in his tracks.”

Jim Ross feels that Heenan and McMahon had a love/hate type relationship but more love than anything else.

“The Brain” occasionally returned to the company for special moments like the gimmick battle royal at WrestleMania 17.

Heenan was inducted into the WWE Hall of Fame in 2004.