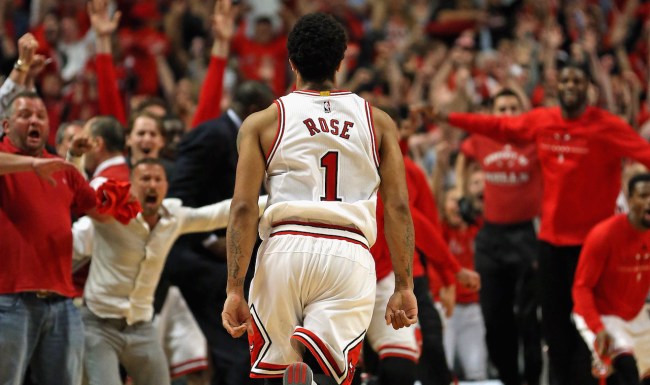 Back when you were playing high school sports, did you ever come up against an opponent that literally ran circles around your entire team?

I remember back in the state tournament for my high school soccer team during my junior year, we came up against a forward that had trained with the USMNT program, and the dude literally dribbled through our entire team by himself without breaking a sweat. It was brutal and equally stunning. It truly is a wildly demoralizing feeling to know that no matter what you do, you cannot stop this person.

Luckily, that is a feeling that all athletes at all levels can relate to, as even NBA All-Stars such as Jimmy Buttler can recall times when they feared an “unstoppable” player.

Butler — who was drafted with the 30th overall pick in the 2011 NBA Draft — joined the Chicago Bulls the season after Derrick Rose’s MVP run, and as a result, says that version of D. Rose was the most unstoppable player he’s ever seen.

Speaking to The Players Tribune, the new Miami Heat small forward was asked who the most unstoppable player he’s ever played with and the four-time All-Star didn’t even take a second to hesitate: Derrick Rose.

“Man, I was there with Prime D. Rose — like MVP Rose. Like, when I would see him do stuff in practice, I’d be like ‘man that’s absolutely incredible.’ And then he’d go and do it two times in the game and I was like ‘man, this guy is for real.”

During the 2010-11 NBA season, Rose — just 22 years and 6 months old — became the youngest player in NBA history to be named Most Valuable Player. However, his career would never reach those same heights, as various tragic injuries ultimately derailed what was shaping up to be a Hall of Fame career.

More unstoppable: @kobebryant or MJ?@JimmyButler breaks down the best of the NBA.

While Rose was ultimately able to rehab and prolong his NBA career (in fact, he’s averaging a respectable 16.5 points and 5.2 assists per game for the Detriot Pistons this season), Butler’s comments serve as a reminder of how supremely talented Derrick Rose once was and how tragic the arc of his career has been.