Wait, Neither Donald Trump Nor Joe Biden Has EVER Had A Drop Of Alcohol?! 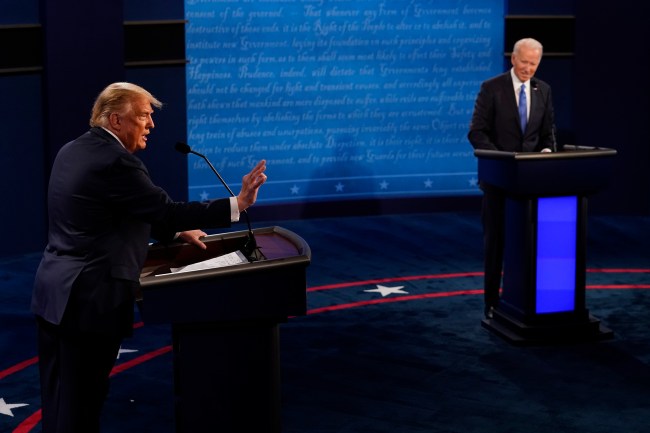 I woke up this morning, leaned over, unplugged my phone, and started my day the same way I always do: a quick scroll through the gentle headlines of world news to put me in the right headspace for the day. Past the exploding COVID counts and the impending shutdowns of major European cities, past the increasingly bloody conflict between Azerbaijan and Armenia, past the existential threat of global warming, past an article saying that STD counts are down and here’s why that’s a terrible sign… I caught a headline that made me sit bolt upright: Neither Trump nor Biden has ever had a drink of alcohol.

A presidential election that has driven a nation to drink is being fought to the bitter end by two men who do not.

For the first time in modern history, both major party candidates for the White House are teetotalers. President Trump and his Democratic opponent, Joseph R. Biden Jr., have not had an alcoholic drink over the course of their lives, by their own accounts.

Maybe this is incredibly common knowledge. But for some reason, I’ve had my head buried so deep in the sand that I didn’t know this about either of them. These guys are 74 and 77 years old. They have over 150 YEARS OF SOBRIETY between them. There is no 150 year sobriety chip at AA. There is no Brazilian Jiujitsu belt for 150 years without a drink. Simply put, that is too much time for the two presidential candidates to have never, not once, not even by accident, tried a sip of alcohol.

Remember Mitt Romney? The closest we’ve seen to a human-made AI? The dude who ironed his shirt while he was wearing it and quietly, composedly exclaimed “ouch.”

I met him once, accidentally. We were both in line at the waffle station at the Stein Eriksen Lodge in Deer Valley, Utah, for brunch. I had just finished scooping strawberries onto my waffle and was placing the scooper back in the bowl when, to my left, a deep voice said “may I have that?” You bet your damn marbles it was Mitt Romney himself, asking me for the strawberry scooper. This is no joke: he was the most presentable person I’ve ever seen in real life. Not a hair out of place. Dressed perfectly, crisply, like a dad model in a magazine for middle-aged menswear. Somehow, I recovered and said, “of course, and nice to meet you, Governor Romney.” I passed the scooper to my left hand, we shook with our rights, and that was that. To this day, it’s a top five life moment for me.

I tell you that because he was, and is, the most seemingly flawless, unimpeachable, unwavering man I’ve ever met. Mitt is, of course, a practicing Mormon. They don’t drink alcohol of any kind. And yet even Mitt Romney admits that he once tried a sip of beer as a “wayward youth” (naughty boy, Mitt). He also accidentally sipped some whiskey in the 1970s at political reception, thinking it was water.

You’re telling me that this guy:

Getting cleaned up for resumption of the Senate. Better salon than Pelosi’s!

Has had 200% more alcohol-drinking experiences than THIS guy?

Last Friday for president to be up in WH partying. If I was president I’ll be up in there trumpPartying !!YAAY 🥂🍻🍾🍾🍾 pic.twitter.com/vSpothNYdx

Stop. Get out of my face.

Now, Trump’s proclaimed reasoning for abstaining from alcohol is pretty sound: he witnessed his brother Fred struggle, and die from, alcoholism. Similarly, Biden points to addiction in his family—his uncle Edward, his son Hunter—as a reason to remain sober. Obviously, these are noble reasons not to test the bubbly waters. And I’m sorry for being a dick, blah blah blah.