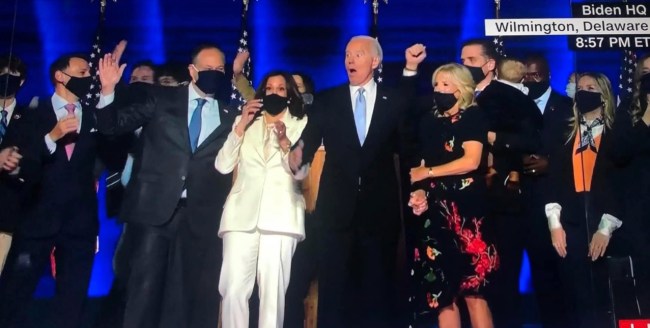 We have our first post-election viral moment.

On Saturday night, President-elect Joe Biden spoke to the nation as he delivered a victory speech hours after all the major news networks projected that he was going to win the Presidential election.

“For all those of you who voted for President Trump, I understand the disappointment tonight. I’ve lost a couple times myself. But now, let’s give each other a chance,” President-elect Biden says as he addresses the nation in his victory speech. pic.twitter.com/q5dxDrC6Wo

After the speech, Biden was joined on stage by his wife Dr. Jill Biden, Vice President-elect Kamala Harris and her husband Douglas Emhoff. Everyone on stage got a bit startled when the confetti cannon went off, but Emhoff flinching inspired some hilarious reactions from the Internet.

Poor Doug. “They shootin’! I told you! I ain’t sign up for this, Kamala!” pic.twitter.com/bMafc72LQA

Kamala’s husband flinching at the confetti 😂😂 he thought they were shooting already , he was about to leave his wife & be out

BABY! KAMALA’S HUSBAND IS NOOOOOOT READY! Lmao, he thought they were shooting ZOWN! 😂😭

Doug Emhoff almost secret service dove in front of Kamala when that confetti cannon went off. He’s worked up guys.

Kamala husband got PTSD already😂 Man jumped like “they shooting!!”