Internet Obliterates The News That Joe Buck Is Trying Out For The ‘Jeopardy!’ Gig 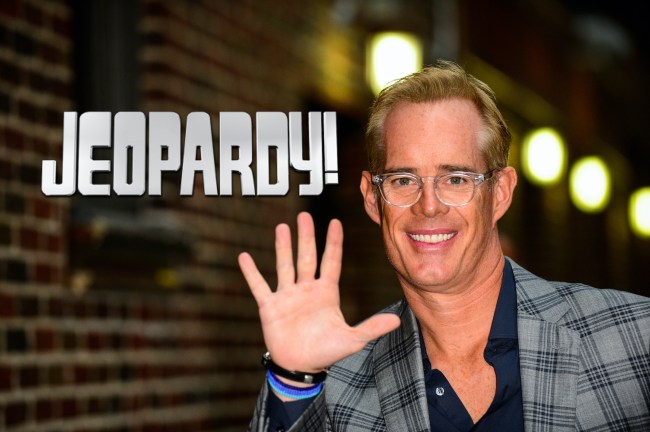 Similar to things like gin or mayonnaise, you’re either all in or you’re all out when it comes to Joe Buck. I’m not sure I’ve ever met someone who’s like, “Yeah, mayo, it’s alright, I’m not crazy about it, but if it’s on my sandwich, whatever.” No. Not possible. If you don’t like mayo, you more than likely despise mayo. Can’t stand mayo. Trust me, I’d know, I’m one of those people. Joe Buck is the mayonnaise of broadcasting: he’s super white, he’s divisive, and he seems to be everywhere.

Buck, who somehow looks both old and young for a 51-year-old, has been the lead play-by-play announcer for Fox’s NFL coverage since 2002, and has been calling the World Series since 1996, which is actually absurd considering that #math tells me he would’ve been just 27-years-old at the time. Surely that had nothing to do with his father Jack Buck being inducted into three separated Hall of Fames — Baseball, Pro Football, and Radio. And according to reports, he may be adding host of Jeopardy! to that list, which is news that I’m sure is going over swell within Twitter’s sports community.

Joe Buck will be a guest host on “Jeopardy!” putting him in contention for the coveted permanent job.

Buck’s episodes are expected to air at some point in the mid-summer, according to sources. Guest hosts have done one- or two-week stints. No word yet on how long Buck will be on. The tryout will not impact Buck’s schedule as the voice of MLB and the NFL on Fox. [via NY Post]

Now, I actually like Joe Buck — as a dude. As a broadcaster, I’m largely indifferent, especially because I largely watch Red Zone these days. If you listen to Buck in any context other than his announcing job, it’s blatantly obvious he’s simply a good dude. So if you can’t stand his broadcasting style, fine, that’s fair game, but to root against him for any other reason is the sort of negative energy we’re out here trying to dispel in the year of our lord 2021. Unfortunately for Joe, Sony Pictures Television, and ABC, I do not speak for the general public, as the reaction to the news on Twitter was largely a chorus of boos.

If there's one person that would disrespect the class and honor of hosting Jeopardy, it's Joe Buck. https://t.co/5RpQGWuMPz

The entire world tells Sony they should hire LeVar Burton. Sony asks, "how 'bout Joe Buck, instead?" The world is broken. https://t.co/AncaYZRFOj

Joe Buck as the next Jeopardy host?? pic.twitter.com/PTsA7xqFbM

So, fans are clamoring for @LeVarBurton to succeed Alex Trebek. They're literally saying, I'd watch @Jeopardy every night if he's the host.
And Burton told me in an interview that the job would make him "exceedingly glad."
Nothing against Joe Buck, but… am I missing something? https://t.co/VcndmXMSSW

I actually like Joe Buck and think he gets a lot of unfair criticism. But this is a no for me dawg. https://t.co/l0RNTgMVNz

Nobody in their right mind wants to see Joe Buck host ANYTHING!! 😠 https://t.co/pczt1M9N8N

I'm sure the new of Joe Buck handling Jeopardy duties is going over tremendously. People seem to love him, and all agree that he is awesome.

Me seeing joe buck is trying to get the jeopardy job: pic.twitter.com/HRjrRXQ0Gh

So we're all in agreement that we riot if Joe Buck is named permanent host of Jeopardy, right?

Buck isn’t the only sports-related personality to throw his name in the full-time-gig ring, as Aaron Rodgers — whose hosting stint has been airing recently — also said he’d like the full-time job.