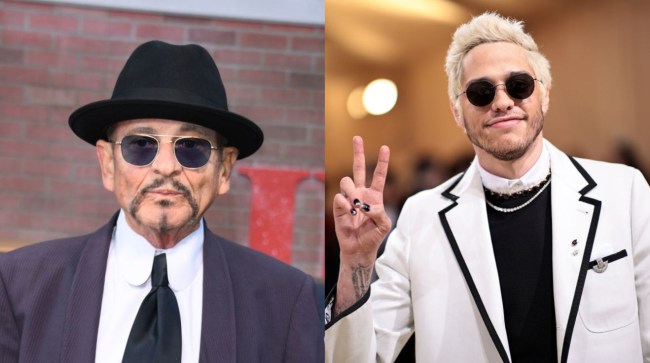 Every so often — with increasing frequency, I should add — I come across a piece of news that makes it feel as though perhaps we truly are living in some sort of malfunctioning simulation. It’s certainly a more comforting hypothetical than the actual reality: humanity is falling apart. But that’s neither here nor there, especially in an article about a TV show.

This show — titled Bupkis — isn’t just any old show, apparently, as it’s not only set to be a Curb Your Enthusiasm-style comedy with Pete Davidson at its center, but reports indicate that legendary Academy Award winner Joe Pesci is, once again, unretiring to play a role in the series. The mindblowing cast list doesn’t stop there, as Bupkis, which will be a Peacock exclusive, also landed The Sopranos legend Edie Falco.

According to Deadline, Bupkis will be a half-hour comedy that tells a “heightened, fictionalized version of Davidson’s life and is expected to reflect Davidson’s real-life persona with unapologetically R-rated storytelling.”

The high-profile casting completes Davidson’s on-screen family, with Pesci playing his grandfather and Falco his mother. For Pesci, who is a series regular, this marks only the second TV show; he previously headlined the short-lived 1985 ABC detective comedy-drama Half Nelson.

Bringing Pesci back to the screen is a major coup for Davidson, who is co-writing and executive producing Bupkis in addition to starring. In 1999, Pesci announced that he would largely retire from acting and has done only three on-screen roles since then, most recently in the 2019 The Irishman. [via Deadline]

Naturally, given the admittedly bizarre combination of talents, the internet’s collective brain broke when it heard the news of Pesci’s return to comedy:

It's so funny that Louis CK – who tried and failed to get Pete Davidson fired from SNL – asked Joe Pesci to be in his sitcom but Pesci told him to fuck off because he didn't think Louis was funny. Now Davidson has snagged Joe Pesci for HIS sitcom while Louis remains a gross creep https://t.co/U5HQV3jsb5

Pete Davidson must be the world's greatest lover, it's the only thing that makes any sense. https://t.co/3vNn2PBJzh

The Karmic commupance of Louis CK trying to fire Pete Davidson from SNL mixed with Louis trying to get Pesci on Horace and Pete but Pesci didn’t think Louis was funny. https://t.co/RwzTbcibdX

HOWW did Pete get him to go back to acting https://t.co/ASPCKjjsak

We all know the trajectory from here:

“Taika Waititi returning for his final Thor with Joe Pesci set to take on the role of the film’s lead villain” https://t.co/xbylFEyI1H

Bupkis will begin streaming on Peacock next year.