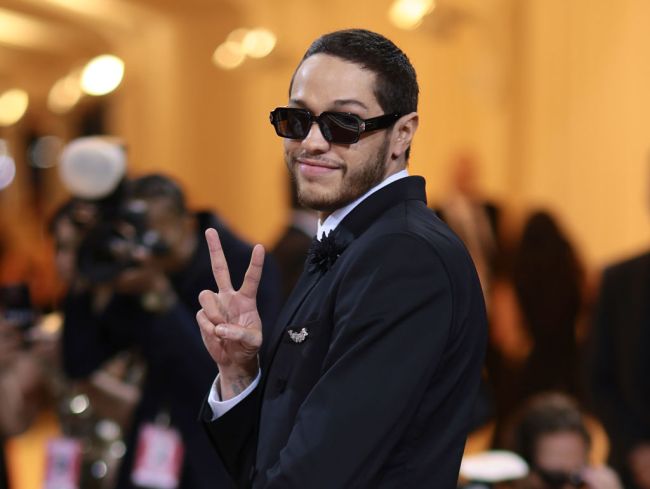 2022 has been a weird year even by living in the 2020s standards. One of the best representations of that is just about everything surrounding Pete Davidson’s relationship with Kim Kardashian.

Even though they’ve only been dating for around 7 months, he already has a tattoo for her and recently got a tattoo with all of her kids’ initials. Then there’s… everything Kanye West has done since Davidson and Kardashian began dating.

Kanye punched a guy because he got upset about seeing them kiss. He wrote rap lyrics about Davidson where he threatened to beat Davidson up. He claimed that Davidson was Hilary Clinton’s ex-boyfriend. He released a music video where he kidnapped and buried Davidson.

Oh, and there was that time that Kanye was reportedly telling everybody that Davidson has AIDS.

It turns out that the world was robbed of the perfect response to that allegation from Kanye. According to Davidson’s stand up set at “Netflix Is A Joke: The Festival”, John Mulaney suggested Davidson should start a rumor of his own.

“John Mulaney called me. He’s like, ‘AIDS? You should spread a rumor that he has polio!”

It’s the only thing that could have made this whole saga even more bizarre. According to the CDC, a case of polio hasn’t originated in the United States since 1973 (4 years before Kanye was born). A case hasn’t even been brought into the country since 1993.

One can only imagine the incredible response Kanye would have had to Davidson spreading a rumor about him having a virus that essentially hasn’t existed in the United States since before The Beatles came to this country.

Unfortunately, now the world will never get to see this chapter of the drama between Pete Davidson and Kanye West play out.