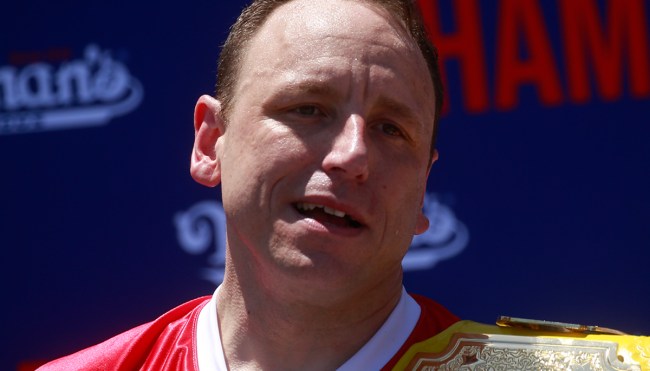 It’s been less than a month since Joey Chestnut cemented his status as the most dominant athlete on the planet after winning the Nathan’s Hot Dog Eating Contest for the 15th time in his legendary competitive eating career (although this was the first time he stopped to casually choke out a protestor en route to retaining the Mustard Belt).

That interruption likely played a role in Chestnut failing to break the record of 76 hot dogs and buns he wolfed down during the sport’s premier event. That’s far from the only bar he’s set over the years, as he currently is also the all-time great in 57 different disciplines, including

Now, the man known as “Jaws” can add yet another accomplishment to his stomach-churning résumé after visiting the two-story Raising Cane’s outpost that recently opened on the Las Vegas Strip on Wednesday (which just so happened to be National Chicken Finger Day).

Chestnut had five minutes to consume as many chicken tenders as possible and predicted he’d take down between 40 and 50 when everything was said and done. That prophecy ended up being pretty spot-on, as he was ultimately able to inhale 44—the equivalent of more than seven Caniac Combos—and even dipped into some Cane’s sauce halfway through (although he resisted the urge to throw a piece of Texas toast into the mix for good measure).

All hail the one and only Tendies King.