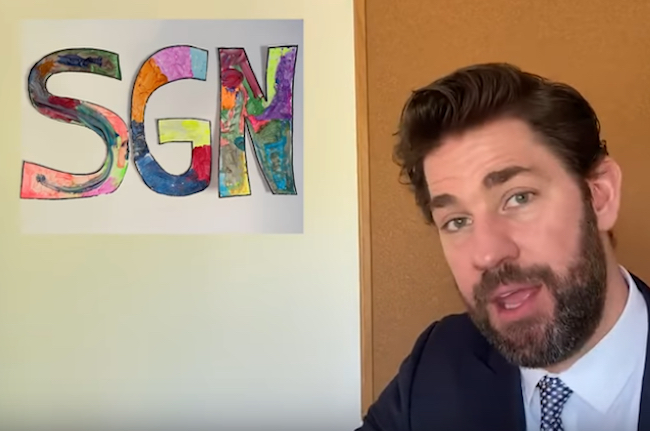 You know the saying “this is why we can’t have nice things?” Well, our boy John Krasinski, unfortunately, became the embodiment of that idea in recent weeks though this whole Some Good News saga.

First, a refresher: back at the start of quarantine, notoriously good guy John Krasinski attempted to both express his creativity and lighten the public’s mood by starting his own talk show web series Some Good News.

The idea is clearly straightforward: Krasinski, from his home, hosts a pseudo-talk show that focuses on sharing, well, good news. Whereas Stephen Colbert usually spends his opening monologue dunking on Donald Trump, Krasinski avoids all of that on Some Good News, instead choosing to shine light on stories that are guaranteed to put a smile on your face.

Here’s where we get to the “why we can’t have nice things” part: seemingly as soon as Krasinski launched the web series, news broke that he’d sold the project to ViacomCBS. Not only that, but he would also no longer be the host. Naturally, the internet was none too pleased (which I think is predictably soft social media nonsense — let the man live and get that bread).

The story of the sale broke last week and Krasinski has remained largely quiet since, until a recent appearance on his buddy Rainn Wilson’s Instagram Live show, where he shared his side of the story:

“Well it’s funny, it was one of those things where I was only planning on doing eight of them during quarantine, because I have these other things that I’m going to be having to do very soon like Jack Ryan and all this other stuff. But more than that, it was something that writing, directing, and producing with a couple of my friends was so much [that] I knew it wouldn’t be sustainable with my prior commitments.”

“I knew the two options were always gonna be that I leave it off with eight in my office—which I would love to keep doing this show from my office forever, [but] it just wasn’t sustainable. So I’d need a partner coming on. And it’s funny, in the first episode I said, ‘Why isn’t there a news show dedicated entirely to good news?’ and now we have one of the biggest news programs in America, CBS News, saying that they want to make it part of their permanent news cycle, which is insane. The fact that we were able to accomplish that—in eight weeks it went from not existing to now being on one of these huge news networks—is honestly one of the most amazing honors I’ve ever been able to pull off. And again, it was all due to the community and to the people.” [via Rainn Wilson’s Instagram Live Soul Pancake series “Hey There, Human”]

It’s a nice attempt at saving face from Krasinski (I mean that seriously, it’s tough to poke a hole in his argument), but let’s call it what it is: he created a project that he didn’t plan on committing more time to and sold it. Nothing wrong with that. Capitalism 101, baby: when someone wants to buy something that you don’t want, you sell it!