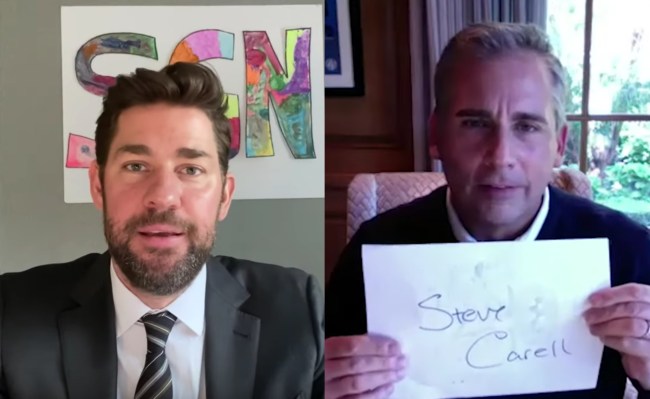 John Krasinksi is keeping himself busy in isolation by launching a new YouTube series titled Some Good News with John Krasinksi. He claims the news is in dire need of uplifting stories so he took to social media to ask fans to share positive news with him and then kicked off his new YouTube show by sharing some of those stories with fans before interviewing his old The Office cohort Steve Carell.

Last week marked the 15th anniversary since NBC’s The Office was brought to TV and it went on to become one of the most popular TV comedies in history. It’s still the most-watched TV show on Netflix despite the show having aired its series finale 2,510 days ago (approximately 216,864,000 seconds ago).

John Krasinski welcomed Steve to the show just before the 6-minute mark in this clip before the two dive into sharing some great behind-the-scenes stories from The Office including how much their lives changed from the moment that TV show got picked up. These are two of Hollywood’s biggest stars and their careers exploded together. It’s wild to see them reminiscing on this.

Here are some excerpts from People.com for anyone out there who would rather read than watch this clip (you should watch it):

The pair reminisced about some of their favorite scenes and moments from the workplace mockumentary series, which premiered on March 24, 2005.

“All of our exchange around the micro-flat screen TV,” Carell said, referring to the “Dinner Party” episode as bloopers were also shown.

“I think most of the memories have to do with things that we shared as a cast. When we were doing Fun Run and it was about 105 degrees outside,” Carell said as the season 4 footage also was shown.

Meanwhile, Krasinski spoke fondly about a hilarious Christmas episode. “I remember when we did the episode where you played Santa and were very upset that Phyllis was already Santa. So you were asking people to come sit on your lap and Brian [Baumgartner], thank God, was chosen to sit on your lap,” he recalled.

“I was supposed to be the button of the scene where they cut to me and make a Jim face. I was never there, I was physically never there because by the time they got swish pan to me, I was out. I was either on the floor or I left the room,” Krasinski added. (via People)

Does it seem like 15-years since The Office hit TV? Actually, it really does. If you go back and watch Season 1 the footage looks ancient and the actors look like completely different people. It’s pretty obvious how much time has passed but it’s impressive how much the show has held up over the years.